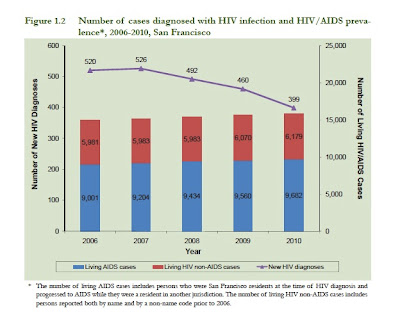 (The purple line in Figure 1.2 represents new HIV diagnoses on a significant downward slope. Credit: SF DPH HIV/AIDS Report, page 19.)
Last week, the San Francisco Department of Public Health posted the 2010 HIV/AIDS annual epidemiology report on the web and the timing of the release couldn't come at a better moment.

Major funding and programmatic changes are in the works by DPH for prevention programs, with more of a focus on testing and treatment versus workshops and peer-led support groups, and several prevention groups are upset about this.

The prevention revisions go into effect on September 1, many of which I enthusiastically support. As the debate over evolving HIV programs continues, I'd like to see this annual survey guide the discussion because it shows where the endemic is and could go, further declines, if the latest epidemiology is taken into account.

This past Monday, AIDS Inc held a very well-attended town hall meeting at the gay community center, and there was not enough talk about the statistics, which clearly show endemic and declining levels of new transmissions and diagnosed infections. Look in tomorrow's Bay Area Reporter for a story on the town hall gathering.

The bottom line of this new surveillance report is that HIV continues to decline in San Francisco.

If the reverse were happening, and HIV infections and diagnoses were up 24 percent you can bet the ranch that DPH would not qualify the rise as slight.

This excerpt from the report's executive summary provides the basic findings:

Overall, the 2011 HIV Consensus Estimates project cautious optimism. The number of new HIV infections forecasted for the year 2011 is 736 - lower than the projection for 2006 (977). However, the uncertainties of the data suggest an upper margin of error that overlaps 977, and we conclude a trend of slight decline rather than dramatic decline. ...

The large majority of estimated living and new HIV cases are among men who have sex with men (MSM), with most other existing and newly occurring cases represented by injection drug users (IDU), especially MSM IDU.

In terms of rates for new infections, transfemales and transmales who inject drugs comprise the most rapidly infected group. The numbers of HIV cases among non-injecting heterosexuals in San Francisco remains low. ...

The number of new HIV diagnoses declined between 2007 and 2010. For recent years, the numbers are lower for cases diagnosed due to reporting delay. ...
Posted by Unknown at 9:58 AM
Email ThisBlogThis!Share to TwitterShare to FacebookShare to Pinterest

I appreciate your continued attention to HIV. It's good to see you're still blogging.

thanks for the kind words, which are always appreciated.