Earlier this week, I blogged on how the New York Times and every other mainstream news outlet ignored the closet that the late Sen. Mark Hatfield of Oregon occupied, and I faulted the straight media for ining him, forgetting about all the gays and lesbians who work in that world.

My Portland-living friend Wayne Harris, who was involved in that city's ACT UP chapter when it altered one of Hatfield's reelection billboards to more accurately tell the voters the truth about the senator. He talked about Rachel Maddow, an out MSNBC anchor, running a moving eulogy on Hatfield tonight, but she omitted anything about his closetry, outing efforts or his refusal to help defeat Oregon's dozens of anti-gay ballot measures.

Wayne asked if Rachel, as a lesbian with queer cred, could simply be unaware of the full life and times of Hatfield, and the harms he perpetrated against the gays. Something I doubt she would be ignorant of. Surely she does not depend only on the Gray Lady for all her background on Hatfield.

Just one of many print references to the outing of Hatfield. From Edward Alwood's book "Straight News": 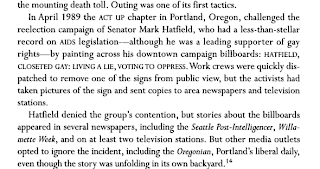 I'm disappointed Rachel straightened Hatfield's closet. Wayne said he would reach out to her and see if she would be open to learning a more rounded and comprehensive history of the former Republican U.S. Senator she praised this evening. I've never had contact with her or her staff, and I hope other gay Oregonians join my friend and urge Rachel to re-examine Hatfield's legacy for the gays.

From her show tonight:

Visit msnbc.com for breaking news, world news, and news about the economy
Another item about the press keeping Hatfield in the closet in his obits. Jeff Mapes, the senior political editor for the Oregonian, omitted the gay aspect from his lengthy obit. It's one thing for the NY Times to keep this hidden, quite another for Hatfield's home state daily to do the same.

The mainstream press owes news consumers the gay truth about Hatfield. It's out there, if only the Times, the Oregonian and Rachel would look for it.
Posted by Unknown at 11:15 PM
Email ThisBlogThis!Share to TwitterShare to FacebookShare to Pinterest

1.) Maddow correctly brags about being a former AIDS activist. I am sure she heard of the Hatfield outing.

2.) The late Jack Nichols, editor of one of the first gay newspapers in the U.S., told me that Sen. Hatfield's former lover had both the knowledge and power to force mainstream NYC media people to censor any reports about Hatfield's outing. I confirmed this fact when a newspaper editor refused to run a letter of mine about this subject.

3.) I bet Maddow is a victim of NBC rules about this that MSNBC also follows.

I wonder who this guy is "helping" Hatfield stay in the closet and how does he have so much power over editors who are known not to be easily influenced by outside pressure?

thanks for your note. as you know, i think it's absurd that maddow completely ignored every gay angle to the hatfield story. i've emailed notes to her today, to the addy listed at her blog, and i really hope she finds a way to report the truth about hatfield and that she looks beyond his stance against the vietnam war and status as a moderate republican. he did a lot of damage to her gay community.