[Correction: The racks are not the property and responsibility of JCDeaux. Those duties belong to Clear Channel. My apologies for the error.]

The following request has been sent to members of the Castro Benefit District, a publicly-funded influential civic associated dedicated to improving the streets and other important aspects of this neighborhood.

By the way, according to Department of Public Works, the primary city body responsible for the public-private contract San Francisco has with the JCDeaux company, a deal struck when Willie Brown was mayor, as of March 2010 there were 702, seven-hundred-and-two, fixed pedestal news rack units allocated around our city. Quite a high figure, that should be reduced with the gayborhood leading the way.

I wish to place the following public safety matter on the agenda at your next monthly meeting - removal of certain news racks blighting the Castro.

After your recent rejection of a request to remove the benches at Harvey Milk Plaza, a public space, I spoke with other Castro stakeholders about the JC Deaux news racks that clutter the gayborhood's sidewalks. Unlike the benches that provide seating for folks, the racks have microscopic value to the community.

By and large, folks favored removing the racks for several reasons starting with the majority of slots for paper publications are always empty. Many people said the racks impede pedestrians and suck up precious public sidewalk space in a high-density business, entertainment and residential multi-use district.

News racks on the streets of the Castro are as necessary as telephone booths with doors for privacy.

I am requesting that the CBD debate sending a letter to the appropriate city agencies to begin removing all of these large metal-and-plastic pieces of street furniture, or at least take 80% them off our sidewalks. Doing so would immediately make our quality of life rise due to a more beautiful and cleaner streetscape.

There is no benefit gained allowing the property of JCDeaux to impede the assemble of individuals or crowds, interrupt the walking flow of thousands of pedestrians, many of whom are public transit users where every second counts to catch a connection on Muni.

On August 21, I strolled the densest part of the Castro for foot traffic and took photos of all the news racks, to show you how much public space they occupy. I also tallied some important numbers to consider.

Within a four-block radius of Castro and Market Streets, there are twelve news racks, containing a total of ninety big slots and ten small slots. Given that the slots, regardless of size, rarely are full of any newspapers or publication, the question must be asked why we allow them to remain on our sidewalks.

If the CBD and the city agree and move to seriously reduce the street clutter of the racks, publications would still be able to sell or distribute their products, returning more public space back to the public and protecting the First Amendment rights of the press.

I ask that you place on the agenda for the September general meeting of the CBD, discussing of curbing the infestation of news racks. Thank you.

Here are the photos: 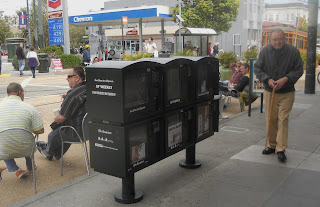 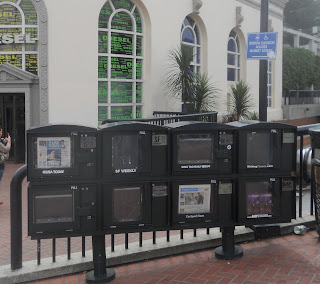 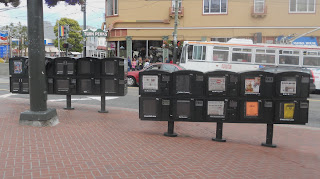 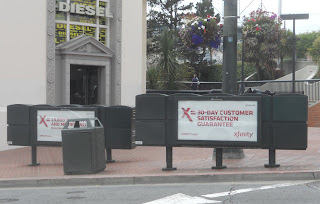 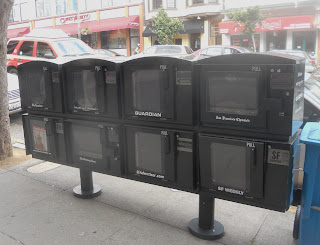 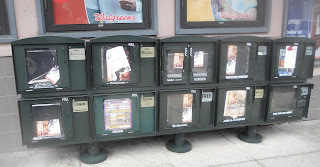 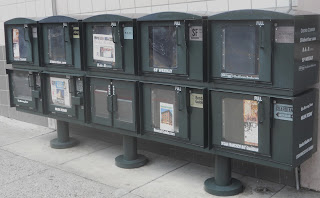 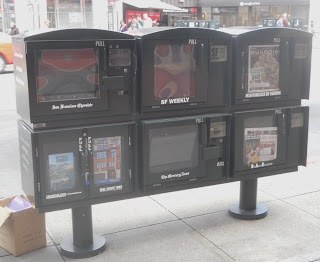 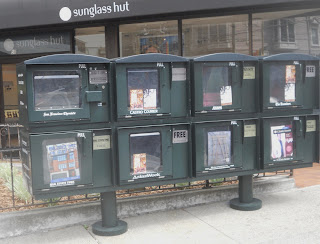 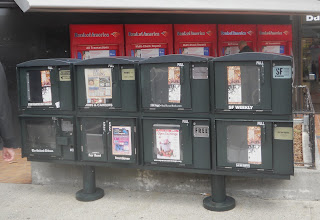 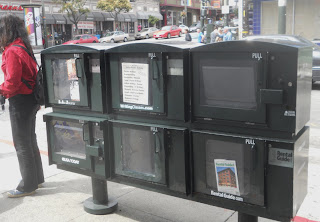 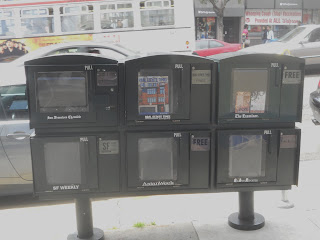 Posted by Unknown at 10:31 PM
Email ThisBlogThis!Share to TwitterShare to FacebookShare to Pinterest