A request has been submitted to Steve Adams, the president of the Sterling Bank in the Castro and the head of the Merchants of Upper Market/Castro who controls the public flag at Harvey Milk Plaza, to lower the flag all day and evening on Sunday, September 11, 2011, to honor all those who were killed on that date ten-years ago and especially gay hero Mark Bingham.

Even though the plaza is city property, the rainbow flag and pole are illegitimately controlled by MUMC, a private group that refuses to either share control or maintain a transparent request process for lowerings.

On September 11, President Barack Obama will direct the White House and all federal government buildings to fly the American flag at half mast to honor the nearly 3,000 people who perished a decade ago. Obama does this, in part, because of a federal resolution passed by the U.S. Congress after that tragic day.

Many, if not all, states and local governments will also be flying the American flag at half mast, both to remember the dead, renew our collective commitment to democracy and freedom, and to show solidarity with liberty-loving people everywhere.

And the lesbian, bisexual, gay and transgender community, along with the Castro district, should be part of those national, state and local efforts. That is, if MUMC finally understands the need to work with activists to make the rainbow flag and pole living tools used to educate, heal and unite. 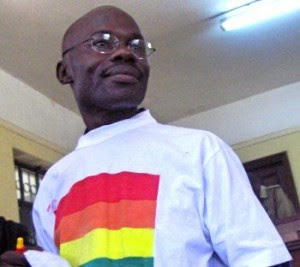 A reminder. On February 3, after community pressure was applied, agreed to fly the flag at Castro and Market Streets at half mast for one-hour, for a solidarity rally in support of gay Ugandans. The rally was held to honor the life and advocacy of murdered gay activist David Kato, pictured, in late January in his home in Kampala. If MUMC can lower the flag for the brave Kato, it should be able to do likewise for the equally courageous Mark Bingham.

My request to MUMC asks for a written response by this Friday, which is a day after their private monthly meeting. Let's hope Steve Adams and his colleagues at MUMC grant my request to lower San Francisco's enormous rainbow flag in the Castro on September 11.
Posted by Unknown at 3:27 PM
Email ThisBlogThis!Share to TwitterShare to FacebookShare to Pinterest