Fiscal transparency in the AIDS nonprofit world took a big step forward today, when the executive director of the AIDS United public policy outfit kept his word to me to disclose his agency's IRS 990s after I requested he and other executive directors do so on my blog yesterday.

My follow up email to the groups mentioned yesterday produced this note from Mark Ishaug: Hey Michael. Good to finally meet you if only by email. Our site will be updated soon. Thanks for bringing this to my attention. All the best.

What he meant by soon was today by the end of business back in DC, where his group is headquartered. This image comes from the group's financials page:

Quite a nice piece of eye-candy, for this fiscal transparency watchdog.  FYI, the 2010 filing shows AIDS United had a $14.3 million budget last year, Mark Ishaug's salary was a reasonable $201,940, and they received $4.3 million in federal funding.

I extend hearty thanks to Mark Ishaug for promptly understanding the need to share his IRS 990s and simply making three-years' worth open for public inspection. His fine example will be used to prod other nonprofit leaders to do likewise.

Unfortunately, the three other nonprofits mentioned in yesterday's post - the Los Angeles Gay and Lesbian Community Center, the National Minority AIDS Council, the National Association of People With AIDS - have not acted to jump on the disclosure bandwagon, despite emails and voice mails from me to executives and other staffers over the past two-days.

All three should disclose a minimum of three most recent filings, more are always welcome as Food and Friends and PFLAG do with five and eight respectively, but the $46 million LA gay center stands out to me as the most egregious of the three groups because they have the most money and resources to be able to instantly disclose six-years' worth of IRS 990s.

The center should be ashamed of itself for leading folks to think six-years of annual reports is all the fiscal transparency they need to produce on their site, omitting that they're a 501(c)3 organization (when such info must lead visitors to ask where the 990 is), and not even embedding a link to Guide Star or the Foundation Center.

There is no reason for executive director Lorri Jean to fear sunshine. Her financials page is woefully unacceptable: 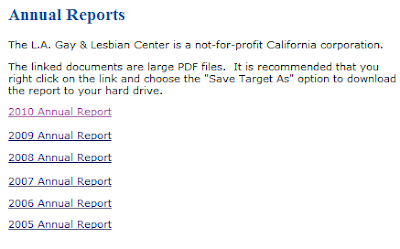 Quite frankly, I'm surprised, given the large budget of the LA center and the many reporters and bloggers down there who follow the agency and report on their fundraising projects, that Lorri Jean has been pressured to post six-years of tax filings.

I'll be contacting the center, and NMAC and NAPWA next week, to encourage them to emulate AIDS United and post many of their IRS 990s for the public to examine.
Posted by Unknown at 10:56 PM
Email ThisBlogThis!Share to TwitterShare to FacebookShare to Pinterest