When Mike Bento of Food and Friends emailed me this week to say his group has posted five-years' worth of their IRS 990s on their site, I thought the group would win a sunshine prize for voluntarily posting the most tax filings among gay and AIDS service groups. Well, I'm happy to say my thinking was incorrect.

Poking around the site for Parents,Families and Friends of Lesbians and Gays, I was pleasantly surprised to see their financial info page discloses eight years' of tax filings, in addition to other reports: 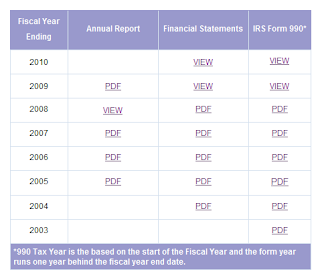 If there is another gay or AIDS nonprofit out there sharing so many IRS 990s, I've not found their web site yet. PFLAG unquestionably wins the Gay Sunshine Award for Most Disclosed IRS 990s and they set a valuable example for every other nonprofit group to emulate.

PFLAG's latest filing shows their budget last year was at $2.6 million, a figure worth noting because with such a relatively small amount of revenue, they clearly have an enormous commitment to fiscal disclosure.

On the other hand, the Human Rights Campaign and the HRC Foundation, with $9.9 million and $32.1 million budgets reported in their respective 2010 filings with the IRS, are cheapskates in terms of sharing 990s on their site. Displaying their fear of sunshine, the HRC and HRC Foundation with a combined revenue stream of $42 million, can only afford to post a single 990 for each on their annual report page:

The National Gay and Lesbian Task Force is similarly tight-fisted about fiscal transparency. On their About Us page, just one-year's annual report is available for public inspection along with the 2010 IRS 990 for their foundation and nothing is posted for just NGLTF. Like HRC, NGLTF has two components. With $6.6 million in revenue, I think this group can afford to imitate PFLAG's leadership on fiscal disclosure:

Both HRC and NGLTF need to get over their eosophobia and immediately deliver on their respective web sites, way more than a single year's IRS 990. There is no excuse for their paucity of fiscal sunshine, especially in comparison to what PFLAG is doing in terms of transparency to the community.

Again, kudos to the folks at PFLAG for sharing eight-years' of their tax filings. Let the sun shine in!
Posted by Unknown at 10:53 AM
Email ThisBlogThis!Share to TwitterShare to FacebookShare to Pinterest