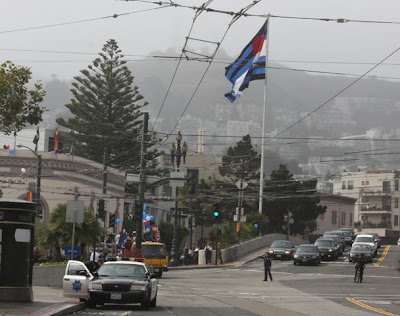 (The black-and-blue flag for our S&M tribe members on display on the San Francisco-owned pole at Castro and Market Streets on September 19, 2010. Credit: Bill Wilson.)
In late September, at the start of Leather Week, for the 11th year, the leather pride flag will proudly fly at Harvey Milk Plaza, which is city-owned property. I extend hearty congratulations to the leather community for securing this special right to fly their flag for an entire week, and over the course of many years.

A leather leader reminded me of all this today, as we chatted on the phone about the opaque process employed by the illegitimate holders of the key to the control box of the city's flag pole, the Merchants of Upper Market/Castro. 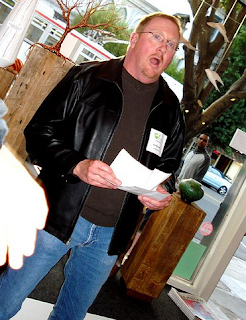 Let's speak truth to power. MUMC is a bunch of control queens ruled by a bully with money, Steve Adams (above), president of the local Sterling Bank and MUMC. There simply is no other word to describe Adams when the issue is the flag pole.

There is no democratic engagement at the private MUMC group. Attendance at their meetings is at the discretion of bully Adams, as is public comment. They fear public discussion and communication. MUMC does not post its inequitable process for using the flag or pole on its site. Basically, you have to suck up to bully Adams or tough luck with your request.

Where the heck are all the LGBT equality advocates to speak up and demand that the public's Milk Plaza be reclaimed by the public and no longer ruled by MUMC control queens?

Back in February, when I and other global gay activists had to deal with hurdles and hassles from Adams before he finally agreed to lower the rainbow flag for our rally on behalf of gay Ugandans, MUMC never showed us their written process rules or contract with the city. That's because neither exist.

After Adams verbally agreed to work with us on a flag-lowering ceremony for the Ugandans, he broke his promise. We showed up at Milk Plaza only to find our flag had been lowered and we were denied the opportunity for ceremony.

In July, Adams was again obstreperous regarding flying a New York state flag for one weekend to mark gay marriages in the Empire State. He irresponsibly first said yes, without working us activist to insure the rope could hold two flags, generating news around the country. When he finally did his own technical test, he learned two flags couldn't fly at the same time.

Did he work with us to find a solution, such as another rope or communicate about flying only the New York flag for two-days? No, no, no. The whole episode reflecting poorly, and accurately, upon Adams' bullying and MUMC's inability to work with _all_ Castro stakeholders.

So today I brush up on MUMC not only allowing the leather flag to fly at Milk Plaza, but for an entire week leading up to the Folsom Street Fair, _and_ our leather brothers and sisters get to also stage a proper flag raising ceremony. More power to them!

But why is there no equality in sharing that special right to use the flag pole on public property with other constituencies in the LGBT community?

It is absurd that Adams the bully is allowed to rule over an incredibly important gay piece of public property, that MUMC refuses to discuss sharing control and costs and responsibilities for the city-owned flag pole, and that an unfair, unwritten and intolerant process for who can access the rainbow flag pole creates divisions.

Harvey would not put up with this deplorable situation. 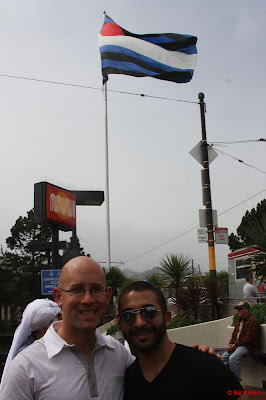 (Castro residents in the shadow of the leather pride flag on September 19, 2010. Credit: Bill Wilson.)
Posted by Unknown at 5:12 PM
Email ThisBlogThis!Share to TwitterShare to FacebookShare to Pinterest