Going through the Randy Shilts collection down at the San Francisco Public Library's main branch last year, several letters from Larry Kramer demanded attention and I made copies to eventually post here.

Being a gay person with AIDS of a certain age, I recall Larry's various scorching letters running as carbon copies in the pages of the New York Native, usually with long lists of folks are his recipient list. Before there was easy, mass automated sending of letters electronically, Larry was spreading his word on dead tree and through the post office.

During ACT UP's heyday, Larry frequently printed hundreds of copies of his latest letters to be distributed on the literature and propaganda table in the back of the room. Half of the enjoyment in reading them came from checking the names on Larry's carbon copy list.

Here's a June 1984 memo to the New York Times and assorted gay leaders and elected officials, whom he labels murderers including his ex-lover and devoted friend Rodger McFarlane.

While that memo has all the anger and brimstone we expect of Larry and directed at the powerful and the privileged, the note that follows it addressed to Randy Shilts, author of "And the Band Played On", reveals a less bombastic side to the man. Click to enlarge: 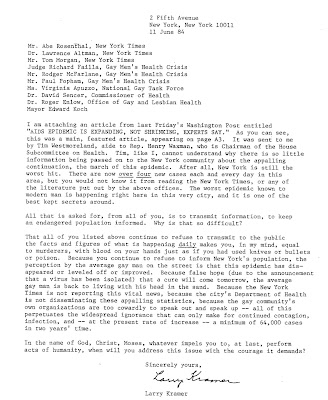 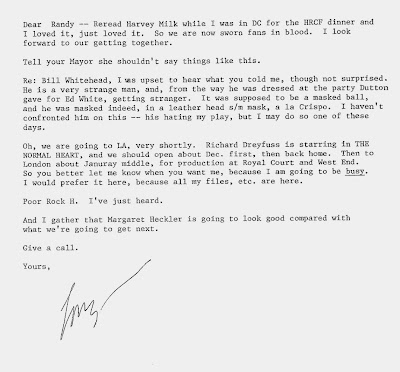 And that concludes our short walk down homo-history lane tonight.

(Credit for both images: San Francisco Public Library.)
Posted by Unknown at 10:24 PM
Email ThisBlogThis!Share to TwitterShare to FacebookShare to Pinterest