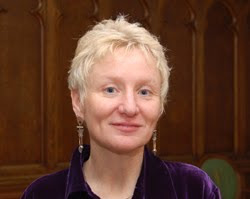 The latest in more than a decade of Chicken Little mathematical models created by Sally Blower of UCLA (pictured above), about HIV drug resistance among gay people with AIDS in San Francisco, came out at the end of January.

A press release from UCLA on the new findings, headlined "Study predicts HIV drug resistance will surge," was remarkably similar to the August 2001 headline on a UCSF release about another Blower-created model on drug resistance, which read "Researchers predict future of drug-resistant HIV epidemic."

All such Blower models follow the same gloom-and-doom pattern, in which she uses complex factors to project worst-case scenarios. After she and her team have completed their model, and it's published in a peer-review journal, the media specialists at UC with her to craft sensationalistic releases.

Blower then almost without fail gets a puff article in the SF Chronicle, that rarely challenges her methodology or findings, and serve as fine examples of media stenography. Click here to read the mouthpiece history the Chronicle has had with her.

Contradicting for once, that stenographic relationship, the January Chronicle story on the latest Blower model quoted a medical authority, Dr. Grant Colfax, expressing concerns with the study and how it might be used. Colfax is the head of SF DPH's HIV prevention programs and also treats PWAs at an SF General Hospital clinic.

The Chronicle said Blower's research showed the potential for PWAs to create "mini-epidemics." Do these folks know how to whip up hysteria out of crystal ball predictions, or what?

Over at the Bay Area Reporter, the gay paper quoted Colfax going further to minimize the sensationalism being peddled by Blower and UCLA, emphasis mine:

"At this point, HIV drug resistance is not a public health crisis. The sky is not falling. In San Francisco, as more people have gone on treatment, we've seen dramatic drops in morbidity and mortality, and we're starting to see a decline in newly reported HIV infections."

Thank you very much, Dr. Colfax, for calling out the "Chicken Little" aspects to Blower and her claims.

I want to point out that Blower's efforts, along with those of her colleagues, to sensationalize their findings is very consistent. They generally tout the complexity or complicated nature of their work, which they, being supposed great brainy types, will distill into alarmist sound-bites. This was the fear-driven quote in their January release:

"Our model showed that what is going on in San Francisco is very complicated — but in a nutshell, it is due to the bug, the drugs and sex," [researcher Justin Okano] said.

Translation: "Those disease-riddled, sex-crazed homos infected with HIV are still alive and having sexual relations." BTW, "the bug" is gay slang for HIV.

Not only are the HIV poz homos of San Francisco and supposed drug-resistance a complicated problem for this city, but according to Blower, the ripple effect is world-wide:

"It's basically about many other communities in resource-rich countries and has significant implications for global health."

Even though Blower and her colleagues make incredibly stigmatizing and demonizing statements about gay PWAs in San Francisco, I give them reluctant credit for always extrapolating alarming predictions from here for people around the globe.

In 2000, when Blower was garnering attention for another math model allegedly showing potential harm to society from AIDS drugs, the Chronicle allowed her to get into print her standard sort of alarmist quote:

"It's a complicated picture, but the bottom line is we really could make things a lot better with these antiviral medicines."

It bears repeating: Sally Blower has been saying the same doomsday stuff about AIDS drugs, potential resistance to them, reducing the complex lives and medical needs of PWAs for a decade to suit her craving for media attention. Occasionally, she offers a variation on her standard quote, such as this one from 2000, which betrays her anti-gay sex agenda:

“It’s a complex interaction, but a simple outcome, really [...] Our results indicate it is imperative that bath houses not be re-opened and that people practice protected sex, particularly those who are on treatment."

Let's be honest here. It's not complex or complicated to see that part of Blower's agenda is to create the same scary math models, stigmatize gays and PWAs with hyped-up UC press releases, get some mainstream media attention, and keep the foundation and institutional grants flowing into her coffers.

But are her "Chicken Little" predictions about AIDS drug resistance contradicted by another study, one based on reality and not some math model? That question will be answered in a follow-up post, and the answer may surprise you.
Posted by Unknown at 10:20 AM
Email ThisBlogThis!Share to TwitterShare to FacebookShare to Pinterest

Would you be interested in looking into a paper Blower wrote for the Vatican?

Vardavas R & Blower S. 2008. The ethics of treatment of HIV-infected individuals in Africa. Commissioned paper by the Vatican.