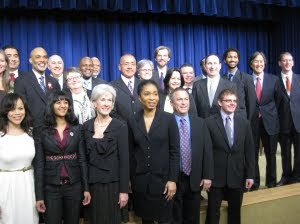 Let the record show that empowerment for persons with AIDS officially died this week. It was killed by the Obama administration, greatly aided and abetted by AIDS Inc.

The Presidential Advisory Council on HIV/AIDS (PACHA), under the leadership of CARE's CEO Dr. Helene Gayle, on Wednesday in a press release from HHS Secretary Kathleen Sebelius announced the names of the 24 new members of the council. Not a single member of PACHA is publicly identified as a person with AIDS.

There are a number of previously out persons with AIDS on PACHA, starting with Cornelius Baker, the former executive director of the National Association of People With AIDS. Of course, NAPWA, the federal government's lapdog, has said nothing about lack of PWAs on PACHA.

Another out PWA advising PACHA is the longtime Southern California gay black AIDS advocate Phill Wilson. Allow me to digress and quote from a July 2004 LA Times article on his lack of management expertise:

Federal auditors are calling for USC to pay back more than $1 million in government funds because of the university's lapses in managing a program to train HIV/AIDS counselors for minority communities. [...]

That official, identified by the university as Phill Wilson, managed the effort for USC while he also headed an AIDS awareness organization that was a subcontractor to the program, the auditors found. [...]

In other cases, the auditors found that padded or inadequately documented expense claims were submitted for such things as wages, travel, consulting services, public relations, and Internet and video services. [...]

The auditors contended that the apparent conflict of interest opened the door for money to be diverted to other activities of Wilson's organization. Those included soliciting sponsors for an AIDS march and conducting town hall meetings in various states to spur political action related to HIV issues. [...]

Looking over the other names of who is now on PACHA, it's riddled with AIDS Inc executives, people from universities, and Douglas Michels. He's the handsomely compensated CEO of OraSure, the corporation that owns and markets rapid HIV testing kits.

Where are the PWAs and advocates unaffiliated with AIDS Inc on the panel? There really aren't any such folks on PACHA.

If the Obama administration were to apply the methods that brought us this PACHA panel to a council, say, on automobile safety and fuel efficiency, they'd set something up with Toyota and ExxonMobil executives.

What's disturbing about HHS's failure to point out that people with AIDS are on the council, putting aside for a moment the fact that they have AIDS Inc ties which may influence their PACHA decisions, is that there hasn't been a peep of protest from the PWAs about being shoved back into the HIV closet.

The lack of full disclosure about people with AIDS sitting on PACHA contributes to the stigma persons living with the syndrome face. IMHO, PWA empower was killed this week.

If all these smart folks -- Secretary Sebelius, Dr. Gayle who once was head of CDC's HIV prevention programs before directing the Bill and Melinda Gates Foundation, PACHA members -- can't be honest and inform America about PWAs serving on the council, I don't expect they'll do all that much to forthrightly address current HIV issues.
Posted by Unknown at 5:01 PM
Email ThisBlogThis!Share to TwitterShare to FacebookShare to Pinterest