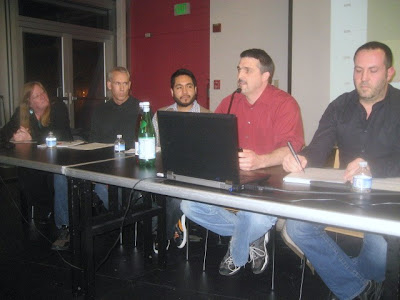 A robust and engaging town hall held last night on the positive aspects of gay wellness attracted 35 individuals from the gay community, in the ceremonial room at the local LGBT community center. The discussion was moderated by Shane Snowdon, UCSF's liaison for LGBT health issues.

First panelist to speak was Clinton Fein, political artist and activist, who presented slides of conservative web sites' coverage from February 2008, when the gays and staph-infection story was creating much hysteria. Fein directed criticism at former SF Chronicle science reporter Sabin Russell, for his story that got the alarm going around the world in 2008. I wasn't aware, until looking at the slides, of just how widespread, and nasty, the coverage was from the rightwing, often cribbed from the Chronicle.

Bill Jesdale, self-identified as a radical epidemiologist, was the next panelist up. His slides were from datasets showing gay men view themselves as healthier than straight men, which intrigued many of us. He asked how to see healthy gay men, even with all the fear and scary stats continually spewing from the media and AIDS Inc. We all were instructed to turn to the gay man next to us, introduce ourselves and shake hands. That is one way to make healthy gay men visible.

The third panelist was Michael Scarce, community organizer and writer. He spoke about the over-saturation of social marketing targeting gays in the Castro, that is being tuned out, and called for campaigns that use a lower volume to reach gay ears. Scarce said all researchers have a duty to actively monitor how their work is covered in the scientific and mainstream press, and when they're misquoted or their work taken out of context, must demand and get corrections to appear in print and online. 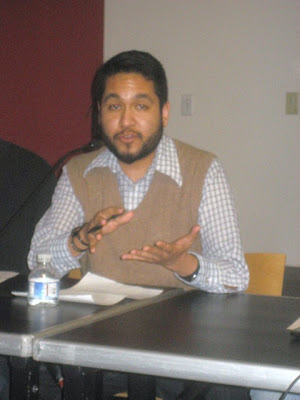 David Gonzalez (above), Latino health organizers, was the final panelist. Among his concerns were the ads that use condescending language targeting gay men of color, and reinforce a stereotype that such men don't know how to take care of themselves. Gonzalez address the need to craft gay health messages for Latinos, that are from the community, and not just translations of English-language based campaigns.

After a round of applause for the panelists, the discussion then opened up to hear from members of the audience, on any topic that impacts gay health. 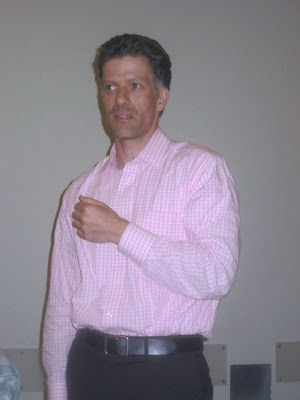 The first speaker was Dr. Grant Colfax (above), who is director of HIV prevention programs for the SF Department of Public Health. He discussed his concerns over a recent press release from UC Los Angeles, about a mathematical model and study, containing unnecessary alarmist language stigmatizing gays. Colfax was satisfied the release failed to capture much media attention.

Other gay men from UCSF and community organizations spoke about good examples of public health institutions working with the community, to promote healthy behavior without hysteria.

Steven Gibson, director of the SF AIDS Foundation's Magnet facility in the Castro, told the audience about the DPH reaching out to his organization, which in turn organized a meeting with gay bar owners when a case of TB was diagnosed in the neighborhood. Collectively, these forces developed a low-key education campaign about TB, that reached at-risk individuals, without alarm. 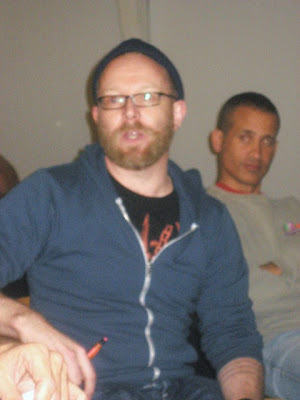 There was a pronounced international presence at the forum, with several men in attendance from abroad.

One of them was Will Nutland (above), from London, where he used to be on staff at the Terrence Higgins Trust, an HIV and gay health org. He spoke about gay/bi/queer/trans men's health needs in the UK, and also mentioned that three years ago a gay health summit was held to look at issues beyond HIV/AIDS. Nutland is in SF for three months, looking at gay health matters, and lessons from here that might apply to the UK gay community. 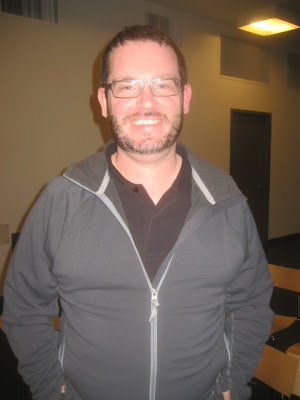 Also from a foreign country was Mats (above), who hails from Sweden and is a public health student at UCSF. I didn't get his last name, but after the forum concluded we had a conversation about gay life in Sweden, where gay marriage is legal. Mats said that he and his husband have felt the social pressure at home, now that they're a married couple, to embrace monogamy and adopt children. That is not for them, he said, and he and his husband are quite fine about being children-free and creating their own relationship rules.

All in all, a very productive discussion among diverse members of the Bay Area gay community, with friends from other countries, about strengthening and expanding gay wellness. Much gratitude to the panelists and everyone who attended.
Posted by Unknown at 10:16 AM
Email ThisBlogThis!Share to TwitterShare to FacebookShare to Pinterest