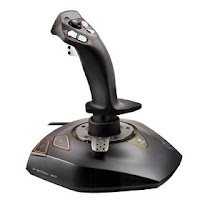 (Just a joystick? No, a potential HIV prevention tool.)
Earlier this month, the Cybercast News Service, a conservative media outfit, ran a long report on its site about the National Institutes of Health awarding Yale university $3.9 million to develop a video game aimed at preventing behaviors among young people that could lead to HIV infection.

News about the grant was touted in September by Yale's p.r. department:

The grant, to be paid out over five years, will fund work by Lynn Fiellin, M.D., assistant professor of medicine at Yale School of Medicine.

Fiellin’s study is designed to develop and test an interactive virtual reality-based video game called “Retro-Warriors” that will teach ethnically diverse adolescents how to make healthier choices. The research goes beyond the use of a game for education and proposes to create a world in which the game players can engage in role-playing to learn to avoid risky behaviors that could lead to HIV infection.

Not sure why the conservatives missed this news in the fall, but their efforts to spark an outcry this month haven't produced traction. The grant has attracted the attention of game news sites.

I can see how conservatives might have problems with almost $4 million going to develop an electronic game for kids, to teach them about facts-of-life like sex and infections.

At the same time, there is much value in reaching young people with messages and education skills, using media platforms that they are engaged with on a daily basis.

There is one thing I'm concerned with, which is mentioned in Yale's project summary:

That missing outcome aside, I hope this project succeeds in finding a new method of delivering an HIV prevention and pro-health message, in the realm of new media used by kids today.
Posted by Unknown at 2:53 PM
Email ThisBlogThis!Share to TwitterShare to FacebookShare to Pinterest

Why in particular would we want this project to delay initiation of oral intercourse? If this is an HIV prevention project it should focus on risk behaviours, and oral sex isn't a significant risk behaviour, certainly not among teens.

Let the kiddies have all the blow jobs they like.