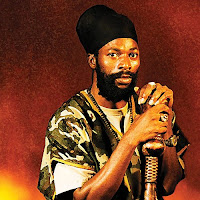 From across the pond, my friend and veteran global gay campaigner Peter Tatchell wrote to me recently about another homophobic singer from Jamaica, coming to my state to earn some American dollars. Peter wants pressure exerted against the concert promoters, but I can't take on this task.

However, I promised him I'd at least spread his call to action, and at least blog about Capleton's homo-hate music and concerts:

In 2004, reggae dancehall singer Capleton had concerts scheduled in West Hollywood, Santa Cruz and San Francisco cancelled because of hate lyrics that advocated the killing of gays and lesbians.

After a global uproar caused concert cancellations worldwide, Capleton and others signed a "Reggae Compassion Act" in 2007, promising to no longer sing and promote the offensive songs. Unfortunately, he violated this agreement, causing Swiss and French activists to get his concerts canceled in 2008.

Here's the background: The 2004 community response in California, and here's proof that he violated the terms of the 2007 agreement. Here are the details and contacts for the upcoming festivals.

Oakland on Saturday, February 20, at the Fox Theatre.

Long Beach on Sunday, February 21, at the Long Beach Arena.

I told Peter I don't have the time and energy to take on this project. Did he think we needed to get the word out and rustle up other community organizers to start talking up pressuring the promoters, concert venues and laying plans for picket lines? He replied:

Yes, send the info re Capleton to other activists who can take it on. The key thing is to press the venues to cancel, on the same basis that they would not host a singer who advocated killing black people. Capleton has clearing violated the RCA. No more deals or negotiations.

Cancellations. Losing money is the only language these homophobes understand.

If anyone reads this and decides to make Capleton's upcoming California concerts a point of contention for the gay community, lemme know. I'll help publicize others activists taking this on.
Posted by Unknown at 5:20 PM
Email ThisBlogThis!Share to TwitterShare to FacebookShare to Pinterest

Why isn't this guy considered a terrorist against the U.S. and picked up by the Department of State? Given his background, how can he be allowed into the U.S.? If am sure if he was a Muslim he wouldn't be allowed in. Is it because he is a black Jamaican the he is given a pass?

Capleton is also scheduled to perform at Mazzotti's in Arcata on February 19th.

You can check out http://humboldtagainsthate.blogspot.com for protest information, if there is no withdrawal as we get closer to that date.

Capleton is also scheduled to appear at the Downtown Brewing Company in San Luis Obispo on February 17, 2010.

i sent the Oakland festival organizers an email

i can't confirm your info on him performing in humboldt. let's keep an out for the date of when he'll be there. there is no info yet at the site you mention.

i did confirm your info and will soon update the details on capleton's CA tour.

i say thanks for sending that email.

please keep sending me info. thanks.

Just google "Capleton arcata" -- here's what I get:

I'd be delighted to be wrong.

i stand corrected, sorry to say. followed your search instructions, and yep, he's gonna be performing in the eureka area. bummer, and i'll get an update posted tomorrow.

found this link, with other dates, but in nevada and miami:

let's get the word out about all of the performance dates, and see if actions get organized.

might be best to focus on the promoters in one or two of the areas where capleton will sing.

Here is what I've sent out to news outlets, politicians, and some religious groups in the Arcata/Eureka area. Please feel free to use some or all of this language.

Capleton is scheduled to perform in Mazzotti's on the Arcata Plaza on February 19th. He is one of the musicians targeted by the international "Stop Murder Music" campaign for lyrics urging physical violence against gay people.

Examples of Capleton lyrics include "All boogamen (gays) and sodemites (can refer to gays and lesbians) fi get killed" and "Yow, string dem up and hang dem up alive." He has continued to sing lyrics encouraging physical violence since promising not to and, I believe, signing the Reggae Compassionate Act. In 2008, his concert in Basel, Switzerland was cancelled as a result of widespread outrage.

I've been holding off on this email for nearly a week, hoping that private discussions would be able to convince Joe Mazzotti that he didn't want to host Capleton. He sounded friendly enough in our exchanges on Facebook, but he stopped replying after a note two days ago saying he was considering disinviting Capleton.

I urge people to protest Mazzotti's for hosting someone who urges people to "string [gay people] up and hang [gay people] up alive." I've put an explanation of why I oppose murder music at my web site: http://humboldtagainsthate.blogspot.com , and will be updating it with more information about protesting. If you wonder why I think these protests must take place, I hope the posting will clarify my reasoning.

Let me make clear that I'm not now and have never been a member of Queer Humboldt, Humboldt Pride, or other gay organizations. The only affiliation I have on this issue is that I've formed the "Humboldt Against Hate" blog. I do not think of myself as a "gay activist;" I'm a Jewish gay man who worries about what happens when hate and bigotry are not challenged.

Joe Mazzotti can be contacted via his Facebook page at http://www.facebook.com/jmazzotti . He understands why there will be a protest, and I'm not sure he even opposes one. He does push responsibility onto the promoter/booker, however. The booking organization is "Bonus Entertainment", the contact person is named Beau, at 707-223-7919. We spoke for more than a half hour earlier this week; I like him, but we simply disagree on this issue.

I find that a good way to see all the Capleton performances scheduled is to type REGGAEVILLE CAPLETON into the Google search window.

The first choice that comes up has a nice display of his scheduled performances.

Capleton's Arcata concert has been canceled. Here's a note I've sent out locally:

Thank you to all of you who took time to let Mazzotti's know of your concerns about Capleton, and who helped spread the word about "murder music." According to Joe Mazzotti, the performance has been canceled.

Queer Humboldt and other area organizations have planned an informational meeting for venue owners and promoters, in hopes that people can learn of potential difficulties before renting out their spaces to the very few performers that are being boycotted due to murder music. If you are a promoter or venue owner and would like to participate, please contact Queer Humboldt or, if you prefer, send me email or add a comment here.

If you are looking for more information about "murder music," the following is an excellent starting point:

It is a wonderful feeling to know that our community will stand up and speak out when necessary.

Thank you for your inquiry in regards to Capleton! We were unaware that He had been So aggressive in his actions, It was my understanding that Numerous well known artists had been listed and that he was one of them but had signed an RCA Agreement and so we were assured by the promoters who rents the room that he was all good now!

That is now known to be Very Untrue! for this reason the show has been Canceled!

Mazzotti's has and always will support any persons right(s) to live happily, healthy and free of the kind of Violent acts this Hater espouses!

We hope that this "DOES NOT" Cause you to reconsider any future involvement with Mazzotti's on the Plaza!

Here is the RaggaMuffin festival twitter - we can make some noise here with hashtags and such:
http://twitter.com/rmfestival

and here's the facebook page where you can probably be very effective:
http://www.facebook.com/raggamuffinsfestival

Now we work to get the subsequent shows shut down.

Would be great to get in touch with Advocate and Glaad to ask for an update call to action that shows how much success opposition brings.

Also, some coverage of the need for venues to put anti-hate speech clauses in their contracts.