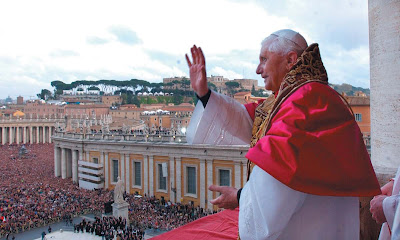 UCLA, The Vatican: African PWA
Drug-Resistance From 'Stock-Outs'
A reader tipped me off to a 2008 UCLA study carried out by Sally Blower, that was paid for by the Vatican. UCLA said the "paper was commissioned for the 34th edition of Nuntium by Bishop Rino Fisichella, Rector of the Pontifical Lateran University, Auxiliary of Rome, Pontifical Lateran University, The Vatican." Sounds like the Pope was one of Blower's bosses at one time.

I wasn't the least bit surprised the stigmatizing mathematician was a hired gun for one of the most homophobic, misogynistic institutional menaces to sane and effective global public health.

Some of Blower's findings for the Vatican are widely known and not new:

There are many other problems in allocating a scarce supply of drugs that have ethical and epidemiological consequences. For example, a constant supply of drugs over many years will need to be provided to each HIV-infected individual in order to sustain the benefits of ARV in increasing life expectancy.

But there was one startling conclusion that stood out, especially in light of a solid month of challenges to Blower's math model allegedly showing HIV strains impervious to drugs in San Francisco's gay community and the dire consequences our city's homosexuals are wreaking on Africa's people with AIDS.

What does Blower claim is the root of drug-resistance for PWAs across Africa? Men who have sex with men in Gay Mecca, or political moves to reopen bathhouses, maybe our supposed ways of cavalierly spreading tough-to-fight strains of the virus? No, nothing like that:

Drug stock-outs will result in treatment interruptions that will increase treatment failure rates and the development of drug-resistant strains of HIV.

What are drug stock-outs? When pharmacies and clinics run out of medicines, and none are available for distribution to people living with HIV and other diseases, that is a drug stock-out.

Look again at Blower's conclusion for what will cause the strains. It's not just that she doesn't place blame on the SF gay community, or even the drugs themselves. Blower posits that the bigger factor that will drive resistance is an unsteady, interrupted flow of AIDS cocktails.

Even though Blower's research for the Vatican is two-years old, at the time it was written, she had almost a decade of math models on potential and actual drug-resistance in San Francisco under her belt. Yet, none of that damn modeling was cited in her Vatican study.

If, as Blower has claimed, San Francisco's status as the canary in the world's public health mine, and our gay sexual and HIV-treatment behaviors here have global implications, the Vatican study would have been a good place to make the argument validating such claims. Maybe I should count my blessings that Blower, UCLA and the Vatican omitted San Francisco's gay PWAs.
Posted by Unknown at 2:57 PM
Email ThisBlogThis!Share to TwitterShare to FacebookShare to Pinterest