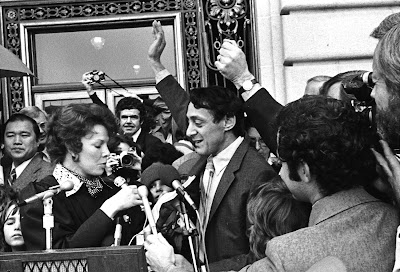 I was aware that the FBI, because someone had made Freedom of Information Act request, the FBI had released its voluminous files on the activities and members of the Gay Activists Alliance and the Gay Liberation Front.

Both groups were at their most active in the 1970s, just like Milk, and there's good reason to think the feds may have monitored the gay icon before his assassination, just as they kept tabs on other gay activists back then.

Since I can't locate any proof that anyone has asked if there's an file on him, today I sent a FOIA request to the FBI for any records on Harvey Milk.

I used the Get Grandpa's FBI File site to generate two letters. The first is to the field office in San Francisco, and the other is addressed to the FBI's central repository in Virginia. That letter-generating site is simple and free to use, for anyone looking for a file on any deceased person.

All I had to do was fill in the blank lines on the form about whose file I was requesting, provide basic info on the dead person, choose one option for proof of death (I picked enclosing a Wikipedia article), then click on the bright green arrow to print. It no more than ten minutes to follow all the steps, and print out the Milk Wiki page.

I've filed a few other FOIA requests over the years for other deceased notable and private individuals, and people often ask me how to make similar requests on the FBI. Like any good open government citizen activist, I want lots of my fellow Americans to do their part to bring additional sunshine to our federal government.

Click on over to Get Grandpas FBI File and make a request today. Let the sunshine in!
Posted by Unknown at 9:24 AM
Email ThisBlogThis!Share to TwitterShare to FacebookShare to Pinterest