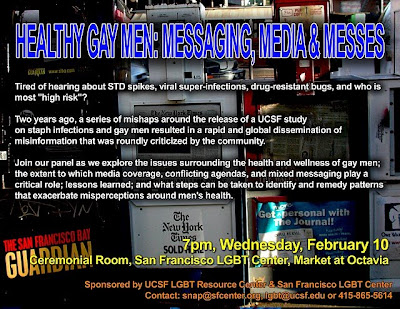 (Artwork credit: Clinton Fein.)
Back in November, I blogged about my friend Clinton Fein's questions regarding the 2008 media hysteria generated by a University of California at San Francisco study on drug-resistant staph infections and gay men. His concerns generated a frank discussion among gay health advocates and Shane Snowdon, the LGBT advocate for UCSF.

A number of us shared ideas about productive follow up to the hysteria, and Shane organized a series of conference calls. What came of the discussions was the idea for a town hall. One focus of the community forum is to hear from a panel of activists for the first hour, then open up the discussion for comments from the audience.

We're hoping to hear from individuals about how they create wellness for themselves and their circle of friends. It would be great to learn what other gay men think is good and positive about gay health, but there are no restrictions on public comment.

The moderator for the town hall will be Shane, and here is the list of panelists:

Come hear what each of these fine activists has to say regarding what's good about and healthy about gay men these days. We will be taping the forum, and it will be available for viewing soon afterward.

Here is the text of our announcement, which I ask you to share on your blog. Come out on February 10 for this town hall and share your thoughts about wellness and the gay community:

Tired of hearing about STD spikes, viral super-infections, drug-resistant bugs, and who is most "high risk"? Two years ago, a series of mishaps around the release of a UCSF study on staph infections and gay men resulted in a rapid and global dissemination of misinformation that was roundly criticized by the community.

This panel will explore the issues surrounding the health and wellness of gay men; the extent to which media coverage, conflicting agendas, and mixed messaging play a critical role; lessons learned; and what steps can be taken to identify and remedy patterns that exacerbate misperceptions around men's health.

Posted by Unknown at 11:57 AM
Email ThisBlogThis!Share to TwitterShare to FacebookShare to Pinterest