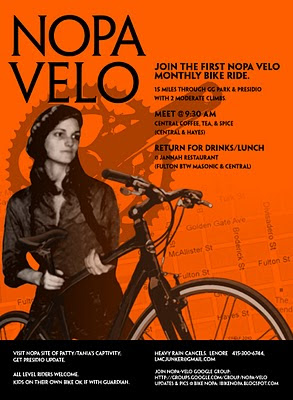 Over this past weekend, only in San Francisco, naturally, a neighborhood biking group organized the Patty Hearst/Presidio Ride, the point being to showcase local sites associated with her during that time and area parks. If I had known in advance this ride was taking place, I would have gone on it.

Even though I missed out on the opportunity to learn more about radical leftist lore, one of the participants, Michael Helquist, has thoughtfully blogged on the ride and share some great photos.

So what happened during the ride? Here's some of Helquist's report, along with two of his pics:

More than 30 North Panhandle cyclists and their friends gathered around a popular local cafe Sunday morning for the inaugural NOPA VELO ride through the neighborhood, into Golden Gate Park and through the Presidio. "We're excited so many riders turned out," said Patty Hearst...er...Lenore McDonald, one of the organizers who was in full Patty/Tania Hearst attire for the special themed ride. [...] 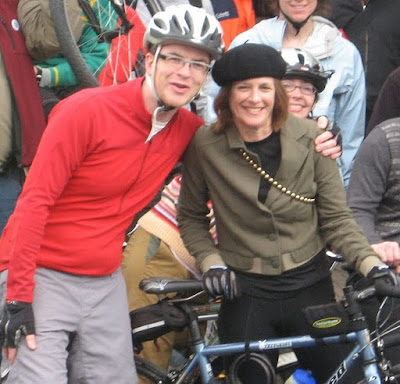 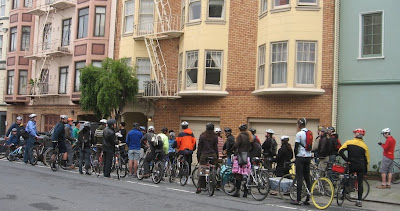 The SLA demanded, and received, more than $2 million from the Hearst family to buy food for the poor. But, during her captivity, Patty was either brainwashed, as she later stated, or radicalized and adopted the name Tania after a protege of Che Guevara, the South American revolutionary. Tania joined SLA members in an armed robberty of a Hibernia Bank branch at 1450 Noriega. She later posed wielding the rifle she used in the hold-up. (Thus the infamous poster of Tania which NOPA VELO's expert designer Rick Helf re-imagined as Tania wielding a threatening ... bicycle).

If there have been comparable biking escapades in either Berkeley or down in Los Angeles, I've not heard about it. Only in SF, kids!
Posted by Unknown at 2:38 PM
Email ThisBlogThis!Share to TwitterShare to FacebookShare to Pinterest