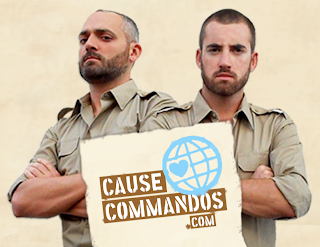 (Luke Montgomery, on the left, and his partner Nate Gudias.)
The radical gay and AIDS activist formerly known as Luke Sissyfag, my friend from the ACT UP days of the early 1990s, is doing charitable work on behalf of Haitian earthquake survivors. Luke, whose real last name is Montgomery, and his boyfriend Nate Gudias, have experience on the ground helping Haitians before the latest calamity struck in January.

They're operating a relief effort from the Dominican Republic, known as Cause Commandos, and sent out a press release and solicitation for donations today. Here are excerpts:

When disaster struck the impoverished island nation of Haiti, it also struck close to the hearts of boyfriends Luke Montgomery and Nate Gudias. Having lived in Haiti and founded an AIDS orphanage in the coastal town of Jacmel, Montgomery feared the worst when no word was received from the orphanage. Within 48 hours the couple raised over $10,000 from family and friends in the gay community and were on a plane bound for the Dominican Republic which borders Haiti. [...]

Luke Montgomery says, "We're on a mission to help as many people as we can with medicine, food and tents for shelter. We're buying the supplies across the border in the Dominican Republic and running them by boat into the parts of Haiti that aid is still slow to get to. When a country is as poor as Haiti was before the quake, even the biggest relief effort is not enough. So we're stepping up to the plate and hoping that the gay community can join us."

"We're not disaster aid professionals but we just had to take action, so we simply got on a plane. After landing in the Dominican Republic we went to local medical supply stores and pharmacies and loaded up on antibiotics, prescription painkillers and other essentials from bandages to baby formula, from IV fluids to injection syringes. We crammed every inch of our big rented SUV full of supplies and every bag we had was overflowing with urgently-needed drugs. We then drove all through the night to the Haitian border. There we hooked up with the Dominican navy. We loaded our all of our supplies onto a relief ship and set sail for Haiti and have been running back and forth ever since." added Nate Guidas. [...]

"There are still families and handicapped people sleeping on the streets who need tents. There are still thousands of hungry children who have no food. There are still injured people with no medicine. What we are doing is simply buying what's needed and getting it the people who need it. What we need to make it all happen is for people in our community to spread the word about CauseCommandos.com and give if they can. Our costs are covered, so 100% goes to supplies for survivors," Montgomery said.

The couple hopes to not only inspire support for their mission, but to also show that ordinary people can make a difference even in the face of an extraordinary disaster. [...]

Anyone interested in donating funds can do so at that site, through PayPal. And this is the videos promoting this worthwhile gay-driven relief effort for Haitian earthquake survivors:

Posted by Unknown at 11:48 AM
Email ThisBlogThis!Share to TwitterShare to FacebookShare to Pinterest