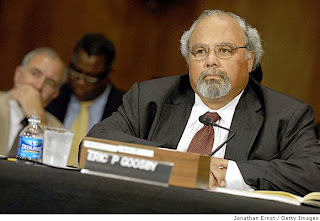 State Dept Blog:
Gays Omitted from Obama HIV Plan
Dr. Eric Goosby (above), America's AIDS czar to the world, on Friday made a post to the State Department's blog, the Dip Note, about two crucial components for improving global public health. Goosby, long active with U.S. gay and AIDS service and advocacy orgs, who was last employed by the very gay San Francisco AIDS Foundation's affiliate org, the Pangaea Global AIDS Foundation, omitted men who have sex with men from his post:

Earlier this month, the Obama Administration revealed an important new piece of its foreign policy agenda: a consultation document on the strategy for the Global Health Initiative (GHI). This document outlines the U.S. Government's operation plan for the GHI, emphasizing integration of programming, implementation of sustainable efforts, efficient approaches with positive results and collaboration among partners.

As described in the consultation document, the GHI will support partner countries in their efforts to improve the health of their people, with a particular focus on improving the health of women and children. As a cornerstone of the GHI, U.S. President's Emergency Plan for AIDS Relief (PEPFAR) is a critical piece of this initiative. [...]

If Goosby, the State Department and the Obama administration weren't afraid of addressing the very real needs of gay men at-risk of contracting or living with HIV through PEPFAR, this is the section of the post where we should have been included:

The GHI prioritizes a woman- and girl-centered approach. Over the long term, improving the health of women acts as a positive multiplier, benefiting not only the health but the social and economic development of future generations. PEPFAR also embraces this approach in our strategy, recognizing the disproportionate impact of HIV on women and the centrality of women to the health of their families and communities. [...]

Let us all praise the U.S. emphasis on women and girls in the GHI and PEPFAR principles and programs. Their needs have not been adequately addressed ever, on all health-related matters, not just HIV/AIDS.

But why can't Goosby and the State Department also show some damn concern about gay men and HIV? Given the past year's turmoil and political harassment for gays in Uganda, Kenya and Malawi, where PEPFAR dollars flows, and gay men living with AIDS are doubly-stigmatized, we really need these U.S. officials giving visibility to gays.

Adding insult to injury, the PEPFAR consultation document that Goosby thinks is so wonderful, and will be the guiding force to the program, fails to mention gays or men who have sex with men once.

The outrageous invisibility created by the Dip Note blog post and the PEPFAR document greatly strengthen the stigma already faced by gay men and gays living with AIDS. If Goosby and the State Department are too chicken to say something, _anything_, about gay men and HIV in 2010, we have a clear example of a problem in need of addressing.
Posted by Unknown at 11:24 AM
Email ThisBlogThis!Share to TwitterShare to FacebookShare to Pinterest

As a side note, PEPFAR recently suspended funding in several African countries, including Uganda. (link)