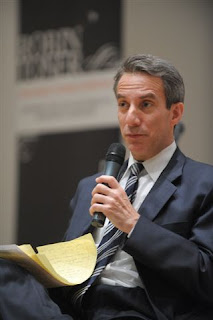 NYT Names Gay Man as National Editor
Is the culture war in America regarding gay men over, or just in a lull?

I would expect some skirmishing from right-wing pundits and other cultural warriors about one of the world's most influential newspapers, the New York Times, appointing out gay man and assistant editor Richard L. Berke (above), to become the national editor next month.

In the same vein, so far, gay cultural war orgs -- HRC, GLAAD, NGLTF -- have been as quiet as their conservative counterparts.

So far, Googling news sites, blogs and the web, turns up nothing from either liberals or conservatives about this former reporter, who just happens to be gay, ascending to the national desk's editor's chair.
Posted by Unknown at 4:31 PM
Email ThisBlogThis!Share to TwitterShare to FacebookShare to Pinterest

I don't hink they're not mentioning his being gay is good. But then the NYT is nothing more than a two-bit scandal sheet to begin with (see it's non-stories about Paterson) and its out gays (like Ben Brantley) are fucking clueless when it comes to gay issues.

Rick is known to many DC folks. Nice guy, was on Gwen Ifil's show a few times. Very professional and super smart.