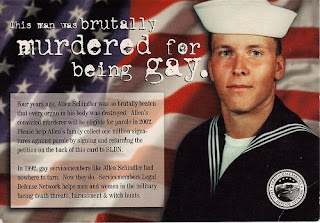 Pam's Blend, Bilerico Use Iranian Hanging Pic
to Illustrate Gay Iraqi Story
To the author, Waymon Hudson, of a column complaining about the State Department's on-the-record deploring of torture and murder against LGBT citizens of Iraq, he is not deeply concerned about using a photo of two gay Iranian teenagers about to be hanged, to illustrate his opinions on Iraqi gay people and the department's comments.

Over at Bilerico, a reader pointed out his minor concerns over the photo:

One little quibble, the picture of the two men getting ready to be hung is from Iran, not Iraq. Not that it really matters, it's radically Anti-gay no matter how you look at it.

You're right, Brett! Thanks for pointing that out. The other photo, however, is. But you're right, it's all radically anti-gay no matter what.

If the point is just to show an image of an LGBT person who died a horrible death because of his or her sexual orientation, Hudson and the sites hosting his column, including Pam's House Blend, could substitute the Iranian gay teenagers, for a piece about Iraq, with a photo of Allen Schindler, Matthew Shepard, Gwen Araujo, Billy Jack Gaither, Julio Rivera, Brandon Teena, Michael Sandy, Tiffany Berry, Sakia Gunn and all the other victims.

There's a radical difference between gay Iraqis and gay Iranians, and in a perfect world, Bilerico, Pam's House Blend and Hudson would simply not add to any confusion about them.
Posted by Unknown at 9:29 AM
Email ThisBlogThis!Share to TwitterShare to FacebookShare to Pinterest