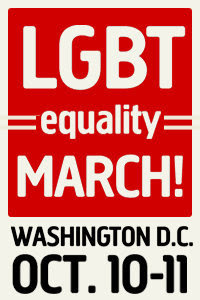 Another New Name for
the March on Washington?
Can you believe it? There's been another stab at branding and naming the October Whatever on Washington, this time on the unofficial Facebook fan page for the event.

Apparently there isn't an authorized Facebook page created to promote the gay march and rally on the Mall, so a fan is sharing ideas and info on his page.

You may recall the action started out as the National Equality March, then transformed into Meet on the Mall with a scaled-down march effort, before turning into the Equality Across America rally, and now to further confuse everyone, the Facebook page has labeled it, with an eye-catching image I must admit to liking, now as the LGBT Equality March.

Three days ago, I said that if anyone didn't approve of the Equality Across America name, to just wait five days and a new name would be tossed into the ring. I was wrong and off by two days.

We need an activist group in DC, committed to staging basic outdoor off-the-computer actions such as pickets and press conferences, at federal agencies, and keeping LGBT people and issues visible on the streets.

We could also use a few pickets at other institutions holding us back, including but not limited to the Human Rights Campaign and the Democratic National Party, organized by the same band of outsiders that Cleve Jones wants to bring to the capital in the fall.

I'd fully and publicly support all the folks who are heading to DC in October to instead go now, and stay there.
Posted by Unknown at 6:47 PM
Email ThisBlogThis!Share to TwitterShare to FacebookShare to Pinterest