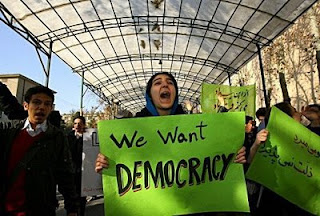 ABC News: Iran's Ruler Uses
Homosexuals to Undercut Rivals
My queer brother from ACT UP/NYC times, and the dark, deadly days of HIV in the 1980s, Walter Armstrong, who recently served as editor-in-chief of POZ magazine, and who has extensive ties to LGBT activists in the Middle East, sent along message today from a gay Iranian.

I wasn't aware that Iran's dictator Ahmadinejad had used homosexuals to undercut his political rivals, until reading Walter's message, so I Googled for the dictator's speeches this weekend and mention of gays. Found one reference, on the ABC News blog:

Ahmadinejad said the Western media's "standpoint is if the candidate they propagated does not win, then there has definitely been cheating. In the West they even seek support from homosexuals to get a few more votes. In Iran however our democracy is based on ethics."

Remember that non-Iranians are asked to wear bright green - shirts, ribbons, hats, scarves, ties - in solidarity with democratic forces in Iran. As soon as my local thrift stores open, I'll be there purchasing green clothes for me and the boyfriend to wear. Please join in this small effort to stand with the Iranian people who voted for and deserve regime change.

From Walter Armstrong and his pal:

A gay Iranian friend of mine sent this to me this morning:

"I am really angry. I went to protests against this stolen election yesterday
and the police hit people very badly. Believe me the things you see in the
pictures is not even one tenth of what is happening here and what they are doing to people

Today afternoon also is going to be a big protest. Undercover police are all
around the city and it is just like a coup d'etat.

Pray for us and make Americans aware of the things happening inside Iran as much as you can.

We hope Obama will not accept Ahmadinejad the legitimate president of Iran. People say if Obama accepts him as the official president of Iran, everyone will be very disappointed and won't respect his words anymore."

Also this on homosexuals in particular:
"Yesterday Ahmadinejad had a 'Victory' Speech and he directly insulted and
threatened homosexuals.

He said all the other candidates in the election tried to get the attention of
junkies, Homosexuals and theives to win in the election but we never support such people—they don't have any rights.'

He used an impolite word for 'homosexuals' between 'faggot' and 'homo' and shows his total disrespect and hatred of us."

Posted by Unknown at 9:22 AM
Email ThisBlogThis!Share to TwitterShare to FacebookShare to Pinterest

Wearing green in solidarity is a fine gesture, but it does absolutely nothing for the people of Iran. They cannot see you wear green, nor would they care, especially when they are fighting for their country, some of them giving up their lives for it as well.