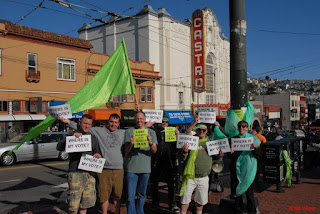 Two dozen gay men turned out tonight for solidarity with Iran's reformers at Harvey Milk Plaza, and for a solid hour held a Gays Without Borders/SF visibility action at the crossroads of America's gay village.

We wore green scarves or shirts, held up signs for the rush-hour vehicular traffic and the hundreds of people exiting the Muni transit station.

Gary Virginia really got into the solidarity spirit with his clothes. He wore a lime green tee shirt and a black cotton shirt, his head sporting a green headband. Oh, he had brought a pastel green flag, that gloriously blew in the wind.

I got on the bull horn every five minutes or so, asking everyone "Where's my vote?" Or chanting "Support democracy in Iran!"

My partner Mike Merrigan, who rarely gets involves in my political actions, which is one reason we've kept our home and partnership intact for 14-years, made signs and participated.

Tommi Avicolli Mecca, Ken Hodnett, Bill Wilson, John Silverman, Tate Swindell, a gay conservative named Jeff who read the rally announcement on GayPatriot.net, and a few others whose names I don't know, show up too.

Big thanks to all made it tonight, and to the reformers and protesters in Iran, we gays of San Francisco are concerned with your fate and will not abandon you in this hour of crisis. 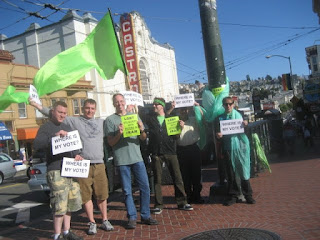 A handful of the guys hold up signs, with the Castro Theatre marquee towering the in the background. 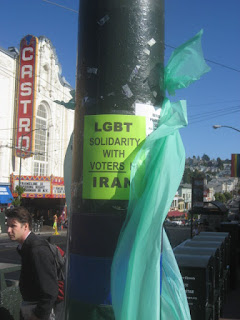 One of our green signs on a lamppost. 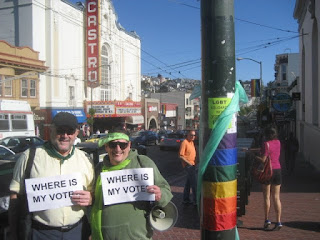 Mike and Mike showing their solidarity with millions of Iranian protesters.
Posted by Unknown at 8:19 PM
Email ThisBlogThis!Share to TwitterShare to FacebookShare to Pinterest