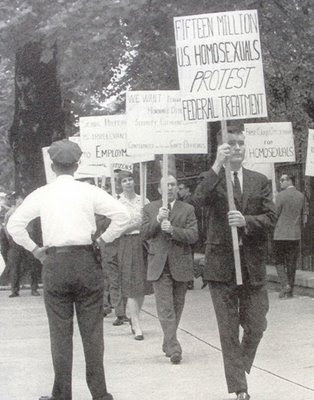 (Homosexuals picketed the White House in October 1965. Dr. Frank Kameny, living gay legend, is second gay man from the right. Anyone recall NGLTF or HRC's last picket anywhere in DC?)
Ah, wouldn't you love to see a headline like that, that was real? Hell, wouldn't you one day like to see Gay Inc leaders taking a multi-pronged approach to advocacy - from issuing forceful press releases to noon-time pickets - toward the Obama administration and our federal agencies?

Well, you have to be a pot-smoker to think of such headlines and actions because we aren't going to see the leaders of our largest DC-based professional advocacy organizations,HRC and NGLTF, and other groups like Lambda Legal, ACLU, P-FLAG, GLAAD, Freedom to Marry, GLAD, et al, and their many donors and members and just regular LGBT community members show up for any sort of visibility action on Monday at the Department of Justice. 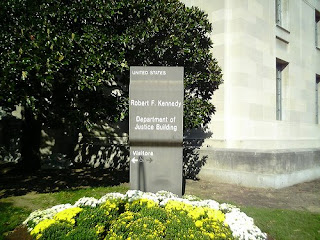 (Do Gay Inc leaders know the way to DOJ headquarters at 950 Pennsylvania Avenue?)

As John Aravosis informed us on Friday about the Obama DOJ defending the Defense of Marriage Act, using arguments alleging banning gay marriage is good for the federal budget, and invoking incest and marrying children, the gay community was again relegated to second-class status on the Obama administration's agenda. We also learned last week that a joint statement was issued by Gay Inc over the matter.

You won't find a single call-to-action suggestion in HRC's response.

What Gay Inc forget to say one word about was action. You know, that small element that helps grease the levers of democracy in securing equal rights for minorities? Simple non-violent actions, including press conference in front of federal agencies and the White House, phone call and email bombardment of the DOJ press office, picket lines during business hours, and other creative methods of civic engagment.

They are not part of Gay Inc's tool-kit for creating legal and social changes. The only engagement Gay Inc wants from the community is the opening of the checkbook.

In May, Joe Solmonese of the Human Rights Campaign told the New York Times about the Obama White House's agenda for us:

Oh, yes they do, and it involves screwing us over in federal court with outrageous, stigmatizing arguments. It may be a lousy plan, but the White House has one for us.

But what about the HRC and the Gay Inc plans and visions for the LGBT community? Is there such a plan? I have not seen it, and if one exists, let's discuss how successful (what an inappropriate word to use related to HRC/Gay Inc), our groups' plan is for advance our equality agenda in Washington.

As far as I know, the last time Solmonese and HRC staffers left their plush Rhode Island headquarters for any sort of weekday, daytime protest was back in September 2007, and they attended and spoke at a rally in Washington on behalf of the Jena 6 teenagers in Louisiana.

Maybe the Jena 6 protest organizers could work their magic again and force Solmonese, HRC and Gay Inc to get out of their suites and into the streets. 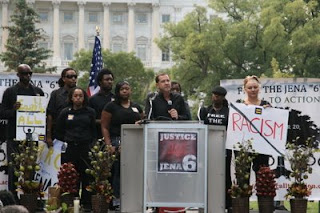