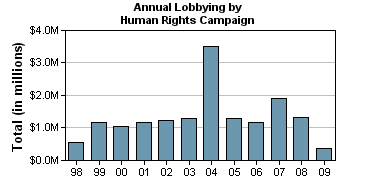 How Much Does HRC Spend on Lobbying,
And is it Effective?
Let's bring a small ray of sunshine to the lobbying budget and efforts of the Human Rights Campaign.

I checked the lobbying reports filed by HRC, and posted at the OpenSecrets.org site, and see that for the first quarter of 2009, HRC spent $360,000. Not much, right? But I don't think that figure is truly representative of all the lobbying and educational work they perform, that is not necessarily "official" lobbying.

Go here to read what bills were subject to HRC's lobbying. And go here to see which federal agencies were lobbied by the group.

In terms of the chart above, interesting that HRC, except for 2004, hasn't spent more than $2 million in any year since 1998 to advance LGBT equality.

Even as a staunch critic of the organization, I want to believe that the numbers on the OpenSecrets.org chart are just a fraction of what HRC actually pours into official lobbying and more quieter educational outreach to Congress and the agencies.

Whatever the amount spent, is HRC effective at lobbying on our behalf? Do we have solid results to show for their work on the Hill and across the federal agencies?

Sure do hope HRC spends more on lobbying for LGBT persons this year. After all, they have a $41 million budget, and it could a long way toward actual equality before the law for us.
Posted by Unknown at 11:51 AM
Email ThisBlogThis!Share to TwitterShare to FacebookShare to Pinterest