If Iranians Followed HRC's Example,
They'd Send a Letter; Not Protest in the Streets 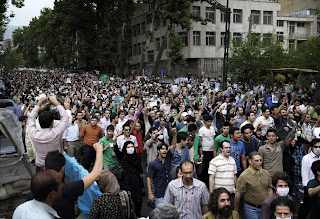 (Of course, this is NOT a crowd of homosexuals at DOJ. It's Iranians taking to the streets to fight injustice and demand change this weekend.)
There's much praise, from too many gay bloggers to name them all here, saying many nice things about the forceful letter Joe Solmonese of the Human Rights Campaign sent to President Obama, expressing deep disappointment over the Justice Department's hard slaps in the "faggot face" on Friday in defending DOMA.

At a time when thousands and thousands of brave Iranian democracy-fighters are justifiably upset with their president stealing an election from them and the opposition leader Mir Hossein Mousavi, and they're taking to the streets to visibily and loudly demand change, I am appalled at how the gay bloggers have praised a letter from HRC. Why accept just a crumb from the $41 million organization?

A lousy little letter, not even a video or audio tape, from HRC to the president, and some bloggers pretend as though the group has taken decisive action. Guess HRC doesn't feel like putting its multimillion dollar media to full use on our behalf to advocate with all the modern communication tools available.

Imagine Mousavi thinking it would be enough just to write to Mahmoud Ahmadinejad. Oh, you can't think of that, can you? I can't either.

But Solmonese is convinced only a frank, yet diplomatic letter is enough to quell the rising anger in the LGBT community and move the Obama administration.

No need for HRC to make a video, issue action alerts, tell gays to stop donating to the Democratic Party, or orgnize a picket or press conference at the Department of Justice. A letter will obviously do the trick. Sure, and I'm Greta Garbo.

So where the hell is anyone either from the usual Gay Inc suspects - HRC, GLAAD, NGLTF, Lambda Legal - or from the rank-and-file community, in terms of staging any sort of action at the Justice Department this week? All are MIA.

Heck, just yesterday, it was Washington's Pride parade and festival and the organizers of Pride couldn't be bothered to change their party plans to have the parade pass by the Justice building. I sure would love to get a report proving me wrong, and showing that _anyone_ in DC's large gay community cared enough to stage any sort of protest, at the Justice building on Sunday, even if no one was in the building.

The failure of Gay Inc or the local DC community to organize a picket today, or at least announce an action for sometime this week at DOJ, is just one more sad example of the widespread "battered partner syndrome" afflicting our community.

How hard and how many times must fags and dykes get slimed, bitch slapped, screwed over and outright abused by Democrats, the Obama administration, and our own namby-pamby organizations before we say enough is enough?

Thank goodness the Iranian protesters do not follow the example of American gays when justice is delayed and denied.
Posted by Unknown at 5:05 PM
Email ThisBlogThis!Share to TwitterShare to FacebookShare to Pinterest