Gay Member of Aussie Parliament's Speech:
'I Want to Get Married' 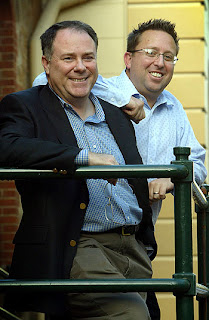 (Ian Hunter, on the left, with his longtime partner and hubby-wannabe Leith Semmers.)
Last week in the Australian parliament, Ian Hunter, a gay member of the Labor Party, rose to make an impassioned plea for his government to allow him to marry the man he loves, Leith Semmers. The couple have been together for almost twenty years, yet to get married, they either have to fly the USA or South Africa.

Hunter's speech generated media and gay community attention Down Under, but I don't think it's received much attention here, so I'm posting the text here.

As I read this speech, I couldn't help but wonder, what if gay Rep. Barney Frank took the House floor to make a one-minute speech comparable to Hunter's?

(Since he's from Massachusetts, a state that allows gay marriage, he can get married to his partner, if he so chooses.)

That would be beyond awesome and I hope Barney Frank, one day real soon, follows the brave lead of Hunter, and calls upon our top elected official, President Obama, and the majority of Congress, i.e. the Democrats, to make an all-out push to repeal DOMA.

Anyway, big thanks to Ian Hunter for the terrific speech! If you want to send him good wishes and thanks, send email to: ian.hunter(at)parliament.sa.gov.au.

The full text of his speech, as provided to me by his office:

I rise today to speak about a matter close to my heart. I want to get married.

But I can’t – I can’t marry the person I love; not in my own country at least.

Prime Minister Kevin Rudd says he and his government believe that marriage should be maintained as the union between a man and a woman. If that’s his opinion – fair enough. Everyone is entitled to their opinion. But to impose his personal beliefs on the rest of the community is just wrong.

Going on from that, the Prime Minister has added that the government might look at partnership registrations some time in the future.

Well, I might have accepted that – 20 years ago. But times and the issue has moved on. Registration is no longer good enough.

I no longer think that it is adequate that I might one day be able to go to the local council and register my partnership as I might register my dog. I want to get married.

Around the world, the fight for marriage equality has been going on – and around the world, states, courts, community and parliaments have been rising to the fight. They are deciding that homosexual and heterosexual couples can choose to marry, and can be treated exactly the same way.

The Netherlands, Belgium, Canada, South Africa, Norway, Sweden and Spain have all legalised same-sex marriage, as have the US states of Massachusetts, Connecticut, Iowa, Maine and Vermont. It looks like New York is pretty close, too, and of course there is the on-going debate in California.

Add to that the list of countries where civil unions are recognized – from the United Kingdom to Luxembourg, and many in between – and you start to realise how completely out-of-step Australia is beginning to look with those nations that we like to compare ourselves with. What a sad state of affairs when the nation that pats itself on the back for being the country of a ‘fair go for all’ denies its citizens this very basic right.

Now, it might be that I am out of step with many of you here in this Chamber – and I might even be out of step with some in my party – and I’m certainly out of step with Prime Minister Rudd on this issue – but I stand here today to let him and everyone else know that second best is no longer an option.

I am no longer content to accept the crumbs from the table.

I am no longer willing to accept a reinforced second-class status.

I am longer prepared to accept a proposition that my married friends’ relationships are intrinsically superior to my relationship.

And I certainly won’t accept the proposal that means my relationship is registered at the local council or some similar body.

Because partnership registration is about death – and what happens to your estate on your death. Marriage is about life – how you live your life publicly in a loving relationship with a partner and with our families.

I want to get married. Next year will be the twentieth anniversary of my not-being-married to my partner, Leith. Yes, I could travel to Massachusetts or South Africa and get married there. But that is not my preferred option: I want to share my marriage with my family and my friends – like we all do.

No-one has ever been able to provide me with an adequate response as to why marriage should be confined to a man and a woman. The response that this form of ‘traditional marriage’ should be retained because of the biblical tradition doesn’t hold much water for all of us who have no interest in getting married in a church – and last year, that was more than 60 per cent of all couples who exchanged vows.

The ability to bear and raise children is another reason often given for standing against gay marriage. You know what? I know plenty of gay parents who are wonderful parents; and I know plenty of straight couples who don’t have children, either through choice or circumstance. So that doesn’t hold up either as an argument.

As for the sanctity of marriage being threatened by gay marriage – all I can say to that is: if your heterosexual marriage is going to be somehow devalued by your homosexual neighbours marriage, that says more about your relationship than it does about mine.

The marriage equality debate is gathering speed around the world and yet Australia finds itself once again a backwater in this debate. It is time for the community’s voice to be raised, calling for marriage equality and I add my voice to that call today.

Because I want to get married – and you, Mr Rudd, are stopping me.

Thanks for posting that.

Going to use in Seattle Gay News - pride week editions. George, thanks, Mr. News Nose Michael ... international pressure on the marriage issue may be an ace for us in America in the long run ... as one by one the western democracies make us looks stupid and backwards ...