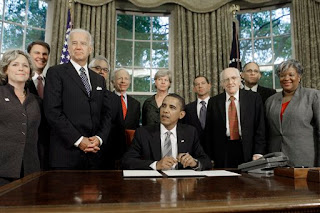 (President Barack Obama speaks before signing a Presidential Memorandum regarding federal benefits and non-discrimination during a ceremony in the Oval Office at the White House, Wednesday, June 17, 2009, in Washington. AP Photo/Haraz N. Ghanbari.)
My, my. How time flies when you're not advancing and effecting fairness and equality at the federal level.

In 1980, the Human Rights Campaign Fund was founded and began working on behalf of gay people.

Over the course of 29-years, I estimate, the Human Rights Campaign, and all its affiliates and permutations, has raised a minimum of $250,000,000. A cool quarter of a billion dollars. That's a lot of money to raise and spend over almost three decades.

Back in March, the Blade reported that HRC's current budget is $41 million, and the group's annual revenue has hovered in that neighborhood for 3-4 years, so I believe a $25oM budget over more than a quarter-century is within reasonable fiscal expectations.

And what federal successes do LGBT Americans have to show for all that dough?

Great photo-op for Spineless Solmonese. Oh, and all that HRC money has gifted us a nice building in Washington, and a great fundraising rubber chicken dinner circuit and bric-a-brac merchandising operation that primarily benefits the Democratic Party.

At this pace, HRC is gonna need a lot more gay suckers to raise another quarter of a billion dollars to pass a federal bill that directly improves the lives of LGBT Americans.
Posted by Unknown at 10:39 AM
Email ThisBlogThis!Share to TwitterShare to FacebookShare to Pinterest

HRC is to the DNC what the NRA is to the RNC. Only much less effective. The gay community is not HRC's client. The real client is the DNC, who wants our money and votes, and then to be let off the hook by our entrenched, six figure-salaried, cocktail party "leaders." Everyone wins but you. And it won't ever be different until the big donors make it so.

... speak to Tim Gill, the Strykers, Bruce Bastien, et al, and give then the real history, and help them change the big, bad orgs or create new ones.