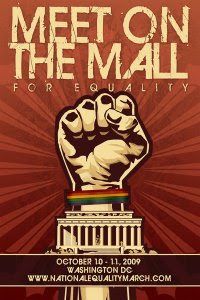 I look at the poster above and see a man's sensual and angry fist, breaking through a Crisco container, and a rosebud in the behind the fist, opening a hole wide and gaping. You red hanky boys know exactly what I'm talking about!

Like my invitation, and yours, to the planning meeting for the MOW in October, my invitation to the meeting where it was decided there will now be a meeting instead of a march, got lost on its way to my in-box.

It's still murky what sort of damn thing is gonna happen in DC in October, and those unsinkable supporters of it will surely show up, not in large numbers, but enough to warrant some press attention. Right?

And I'll be watching the hundreds of my LGBT brothers and sisters parade and give speeches like they did in Fresno recently, all from the comfort of my home, either on the web or via C-SPAN.
Posted by Unknown at 10:50 PM
Email ThisBlogThis!Share to TwitterShare to FacebookShare to Pinterest

Surely one of the most scandalous posts to date! From a historical perspective, the clenched fist was used in a number of works by German photomontage artist John Heartfield, associated with the Dadaists.

hey anonymous - i don't have any chaps! will khaki shorts do the, um, trick, for you? happy to see you're also keeping a sense of humor about the silliness of the Whatever on DC in october.

hey sean - thanks for confirming that different people see different things in the same poster for gay rights. our opposing opinions on the fisting/meet in the middle of the mall poster show there is true diversity in gay thinking today.

regarding your participation in the october DC action, you can raise both fists and scream all you want at the empty government buildings. i'll be sure to look for you, and the hundreds of other gays, on the web and CSPAN.

But this kind of crap has always gone on. And it does not help. It may make some people feel better, but I don't think that's our objective.

If there's anything that persuadable, mushy-middle voters and politicians hate -- and distance themselves from -- it's angry gays with fists having tantrums in the street. And putting it in the poster. To make sure everyone knows that a public tantrum is the Big Idea.

Not that I'm into HRC's wobbly-kneed sellout approach to all things. But you gotta be smart. You gotta fight smart.

I am totally against this stupid march that will not accomplish anything for our community. It's time to be more inventive and creative in our struggle for equality.