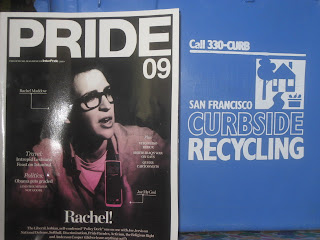 [UPDATE 2: SF Pride has denounced the 'Pride09' guide. See the committee's denouncement of the guide in the comments section. And thanks, SF Pride, for speaking out against the white-washing of the guide.]

Pick up a copy of the "official magazine of InterPride 2009" littering many San Francisco and other cities' watering holes, then get a good pair of strong sunglasses to wear while reading it. It's so white, the glare may blind LGBT readers.

The driving force behind the magazine appears to be Joe Jervis, of the mega-hit blog JoeMyGod. Starting with the cover, where "JoeMyGod" and "Joe Jervis," the only person named twice, to the masthead where he's listed as the advertising director, to the contents page and his mention as the author of the cover story, to the contributors' page, that has a bio and photo of him, to his author credit on the first page of the interview with cover lesbian Rachel Maddow, to being prominently mentioned and quoted in the "There Goes the Gayboyhood" article, there's Joe.

He's built quite a mini-empire between his blog and our official Pride09 publication, and there's nothing wrong with that.

What troubles me most about the mag is the lack of colorful racial and gender-variant diversity of the full spectrum of folks who comprise the LGBT community.

Let's go over the photos and illustrations in the "book" of the mag, beginning with the cover and white lesbian Maddow, and tally up the numbers on the racial component of who's included.

1 shot of a possible Hispanic man, David (No Last Name Given);

If you compare last year's Pride guide with the current edition, produced by the same creative and advertising team, you'll find one feature repeated, like bad indigestion. In the 2008 there was a spread on gay and lesbian couples. Click here to see last year's mag. The 2009 edition is not online. If it is, send me the URL and I'll link to it.

Look at the written content of the Pride09 mag, and there's a light sprinkling of LGBT people of color referenced or quoted. Among them, Pam Spaulding, Mandy Carter, Sandy Tsao and Dan Choi. I couldn't find any transgendered people mentioned in any of the articles.

On the advertising side of the mag, things weren't much better for persons of color.

Out of 19 full-page ads illustrated with people, versus ads with just an airplane or vodka bottle or side effects info for an HIV medicine, only one clearly and prominently featured African Americans. That lone ad is from the Ali Forney Center, a nonprofit providing housing to LGBT youth.

If you look really close, two other ads, one from Macy's, another from InterScope Music, show people of color. An important part of any mag, the back cover ad, for a social networking site, features snapshots of seven white gay people.

While there are 5 full-pagers showcasing two gay males embracing or kissing, there are zero such ads showing only lesbian couples. Actually, the Macy's two-pager, with thumbnail snaps, has one with a lesbian twosome and another with three lesbians getting close.

And good luck trying to find more than a token woman in the opening-pages two-pager from Levi's, or the Ali Forney Center ad.

So where the hell is the full multi-hued rainbow of LGBT American people in this official Pride09 publication? Couldn't JoeMyGod and his colleagues find any living African Americans to put in the mag, or a few Asians and Latinos and Latinas and Native Americans and Trangendered People, on the editorial side or in the ads?

How the hell did we get to the point that our official guide to the Pride season is bereft of people of color and transgenders?

This Pride09 guide is NOT my guide to my community. I've already tossed the damn thing into the recycling bin. I'm sorry trees died to make the Pride09 guide possible.
Posted by Unknown at 10:19 AM
Email ThisBlogThis!Share to TwitterShare to FacebookShare to Pinterest

Here is the link to this years pride guide:

Now SF Pride has joined the denouncement of Pride 09:

Flipping through the pages of the ‘Pride 09’ magazine which recently hit the streets, locals might wonder why nothing about San Francisco Pride is in the edition – no features, no listings, no photos, no event information, no maps, no Grand Marshals, no stage line-ups, no accessibility information... This curious omission is no accident. The San Francisco Pride Celebration Committee was not asked to nor was involved in the production of the glossy magazine that was dropped on street corners throughout San Francisco. We are deeply concerned that community members will be left with the false impression that this magazine was officially sanctioned by San Francisco Pride, which it was not.

Adding insult to injury, the publication contains a shocking lack of diversity – the very thing for which Pride is so known. We are very concerned that a publication calling itself ‘Pride 09’ has no relationship to our local Pride Parade and Celebration and has no diversity. Our diversity is the reason that we gather as a community each year to celebrate at Pride.

How, then, is it possible for this publication to have asserted its claim to our community’s long-standing ritual? Pride in whom? When our local community is as absent as diverse images of the people who make it up, we must ask ourselves if this publication has any relevance to the civil rights roots that gave birth to the Pride movement in the first place.

The ‘Pride 09’ magazine is not a reflection of our community’s Pride event or of the Bay Area’s LGBT community.

We wish everyone a wonderful Pride weekend and look forward to welcoming people from all over the world to this important celebration of our diversity.

i spoke with lindsey jones at the SF Pride committee and she is horrified at how un-colorful the 'pride09' guide is.

i really hope the two men who created it, peter mcquaide in LA, and joe jervis in NYC, give us an explanation about how so many colors of the LGBT got left out.

Thank you so much for this posting. I lived in Los Angeles for 14 years and went to SF all of once.

I had heard about how cold it was but what I saw there really turned me off, especially the Castro district.

The response given by SFPride forces me to rethink my views about SF. Thanks again for posting this.

I wrote the article. "There Goes the Gayborhood," and I spent a major portion of the article discussing and quoting from people of color, including Mandy Carter and Gaye Adegbalola. And I stressed the fact that the gentrification of "gaybhorhoods" has often come at the expense of communities of color. Furthermore, I discuss the fact that transgender youth are often displaced when gayborhoods go upmarket.

It would be nice if your criticism were informed by a close reading of the magazine instead of hysterics and polemics. People might actually take it seriously.