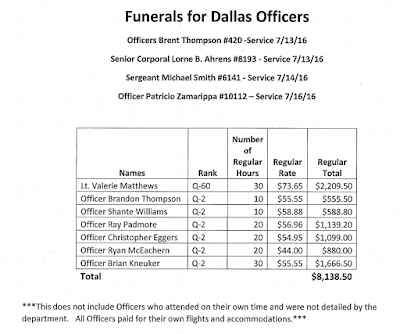 There is no public safety reason for San Francisco cops to attend funerals of slain police officers in cities around the nation, nor is there justification for taxpayers to pick up any part of the costs when our cops choose to pay their respects to fallen colleagues.

Somehow, it's considered work that seven SFPD personnel flew to Dallas earlier this month for that city's tributes to their dead officers and we're paying out $8,100 for those seven who were on City time.

How did average San Francisco residents benefit in any direct way from the Dallas trips?

I wonder if the City would pay a municipal employee's hourly pay if they went to a funeral of a black man or woman killed by a cop.

Would San Francisco taxpayers and police watchdogs approve of assistant public defenders billing the City for time spent at the funeral of Philandro Castile in Minnesota or Alton Sterling in Louisiana?

The information shared here was in response to my public records request submitted to the SPFD. Follow the municipal money!
Posted by Unknown at 1:38 PM
Email ThisBlogThis!Share to TwitterShare to FacebookShare to Pinterest

Thanks, Mike, for spotlighting this clearly outrageous misuse of taxpayer money.

Of course, none of us are surprised to see the police department bilking the public for funds for projects that have no public benefit. It is not the only city agency that has long treated taxpayers as dupes -- sources of funding for whatever ill-conceived program suits its fancy.