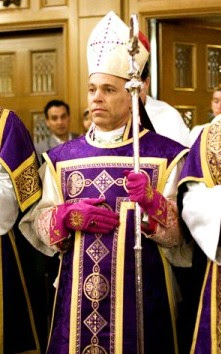 Oh, that Salvatore Cordileone, leader of the San Francisco Catholic community, rarely misses a chance to illustrate his disdain for LGBT people. Some might call him an Archbigot because of his provocations toward gays, the latest of which came last month. 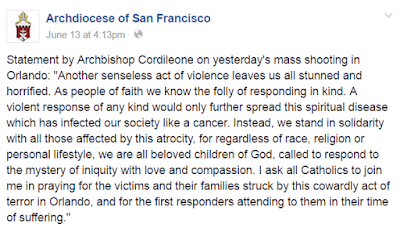 The day after 49 lesbian, gay, bisexual, transgender and friends were massacred at the queer nightclub Pulse in Orlando, the SF Archdiocese issued a statement from Cordileone, of sympathy posted on their FB page. Here's the offensive section:
"We stand in solidarity with all those affected by this atrocity, for regardless of race, religion or personal lifestyle, we are all beloved children of God, called to respond to the mystery of iniquity with love and compassion."
If Cordileone's solidarity can't encompass using the words sexual orientation, gender identity or the collective phrase LGBT in describing the victims of Orlando's, then he could just keep his hateful mouth shut.
Cordileone might reach out to LGBT Catholics and learn finally, in 2016 and San Francisco, one of the gayest cities on the planet, how to better choose his words when writing about and praying for gays and our allies.
Hey, Sal, to paraphrase Pope Francis, who are you to judge LGBT folks and demean us with the "personal lifestyle" wording in the aftermath of the Orlando tragedy?
Speaking of personal lifestyle and all, where did you get those fuschia gloves? They match your lavender vestment so well!
Posted by Unknown at 9:49 AM
Email ThisBlogThis!Share to TwitterShare to FacebookShare to Pinterest