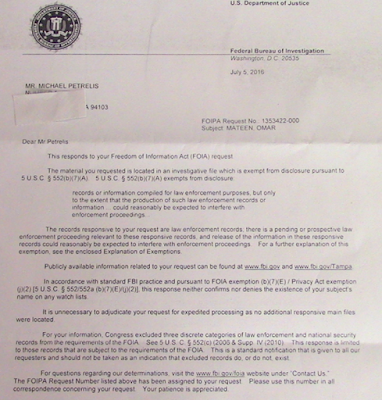 The Federal Bureau of Investigation is mighty inconsistent about releasing or denying access to files of great public interest, including the massacre of 49 LGBT and friends in the Orlando gay Pulse nightclub in June.

Sure, the agency has held news conferences and shared selective bits of information about the killer, whom I won't name here, and their investigation into matters such as whether he was gay and calling him in for questioning a few years back but release of any records, in response to a Freedom of Information Act request, is rejected.

Yes, I expected such a response after decades of filing FOIAs with the agency but it still was important to me to make the request and see what happens. The most important advice I give everyone considering making a request is to just file it -without delay.

Never know what records you could receive if you don't ask for them. Have you filed a FOIA lately?
Posted by Unknown at 3:01 PM
Email ThisBlogThis!Share to TwitterShare to FacebookShare to Pinterest