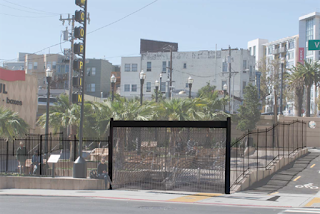 The City's next steps to fence off the public space at the McCoppin Hub, near the intersection of Valencia and Market Streets, are outlined in this update from Rachel Gordon, the public info officer for the Department of Public Works.

State senator-wannabe Supervisor Jane Kim, in whose district the problem public area is located, as far as I can determine, has steadfastly not said a word about DPW's plans. That may change once the anti-homeless fencing is built.

Anecdotally, there's been a reduction in the number of homeless folks, and their belongings, in the hub in recent weeks and a Pit Stop has setup shop weekdays in front of the U-Haul parking lot. From DPW:

"Here’s the latest: Over the past several months, our designer has been working to resolve issues related to the new fence and to prepare bid documents that lay out the scope of work for the contractor.

"The project will involve removal of many of the bollards and chains, installation of perimeter fencing, two gates that vehicles can access and three gates for use by pedestrians.

"In addition, there will be some concrete demolition, and new concrete will be poured to provide accessible access at the west end of the site.

"We expect the contractor’s proposal (which will include the cost) by July 29, and work would begin within four weeks or so of that date. The initial work will include installation of a temporary fence, which close down the HUB while the work is underway.

"The City will be contracting with Cal State Constructors, Inc. Hours of operation of the Hub will be determined by San Francisco Real Estate Division, but would likely model the dog and skate parks across the street -- essentially 7 AM to sunset. The hours can and will be adjusted as needed."
Posted by Unknown at 11:37 PM
Email ThisBlogThis!Share to TwitterShare to FacebookShare to Pinterest