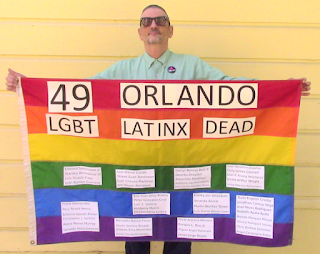 The LGBT rainbow flag I hold in my hands, with the names of the 49 dead LGBT and Latinx, was created with the tremendous assistance of Mike in our living room and kitchen.

It will hopefully be presented tomorrow, Sunday, July 3, at the 11 am mass at St. Mary's, 1111 Gough Street, to the congregation by myself and my friend Bill Wilson. We'll see if we're allowed in.

Skip brunch and sleeping in this Fourth of July Weekend and join us!

Here's a terrific note from my friend Patrick Monette-Shaw, stating a few good points about what needs to change with the local archdiocese:

"Congratulations, Michael, to you and Bill Wilson for staging this needed demonstration in support of our fallen in Orlando tomorrow at St. Mary's Cathedral. It's too bad the Pope has allowed that arch-homophobe, Archbishop Salvatore Cordileone, to remain as archbishop of our City of St. Francis.

"Pope Francis should have a litmus test for those who have risen to the top in the Catholic hierarchy: If Church leaders can't utter apologies to gay people for centuries of Vatican-approved abuse against us, then they should not be allowed to rise, and stay, at the level of archbishop.

"The next thing Pope Francis should do is to replace Cordileone, as the Pope's act of contrition!

"God bless you and Bill Wilson, Michael, for having the moral and ethical courage to confront the Catholic Church, since I'm assuming many of the Latino/Latina brothers and sisters massacred in Orlando were raised, or were practicing Catholics!"
Posted by Unknown at 3:59 PM
Email ThisBlogThis!Share to TwitterShare to FacebookShare to Pinterest