As you all know, I'm a staunch critic of the Mission District's David Campos, a queer member of the Board of Supervisors, but today I came to his defense about two recent episodes organized by Mayor Ed Lee where City infrastructure was used to single out Sup. Scott Wiener and no other supervisor for attention.

On June 15, the mayor swore in members of the newly-created HIV council at an invitation-only City Hall event where a social media campaign about PrEP was also unveiled. Despite Campos' long history of advocating for City funds to make PrEP available to all at-risk HIV negative folks who need it, emails from the mayor's staff reveal only Wiener was asked to participate in the ceremony.

Neither the mayor's aides nor folks at the Department of Public Health, which greatly assisted in organizing the photo-op and presser in the middle of Pride Month, oh, and an unexpectedly tight race for Wiener against Sup. Jane Kim for state senate, engaged with Campos.

If the focus truly were on the HIV council and the PrEP ads, even I say, if only as a professional courtesy and to show the queer and Latinx community that the mayor and DPH that all appropriate City Hall leaders are working toward success of the council and prevention of HIV transmission, Campos should have been there on June 15.

The other episode of Mayor Lee elevating Wiener as the only supervisor involved with an important City function, that was widely promoted via the mayor's press office folks, occurred at a June 20 meeting of law enforcement, emergency responders and SF Pride executives, about security concerns for SF Pride after the massacre of 49 LGBT and friends in Orlando.

It sends a very exclusionary message that Campos was not invited to either the powwow or presser, and that only Wiener, again, was given mic and media time, not to mention demonstrates use of City resources featuring just one gay supervisor. There are two of them, in case the mayor has forgotten.

One point here is not to be a cheerleader for Campos but instead to say these events should have seen him at the mic for a few minutes.

My larger point is that, regarding security at the two-day SF Pride Celebration in Civic Center, which is squarely in Kim's District 6, where many queer Asians live and work, she should have been invited to City meetings and the presser.

Kim also should have been engaged on the HIV photo-op, if only for the reason many District 5 residents are among the hardest-to-reach at-risk folks for becoming poz, and she's another supervisor besides Wiener who's an AIDS advocate.

If the mayor, public safety and police officials, and DPH were truly interested in using all available supervisors when staging media events after dog-and-pony-show coordinating meetings, then more supervisors than Wiener need to be involved.

Otherwise, the mayor is using City personnel and infrastructure to benefit Wiener and that isn't right, democratic or fair. 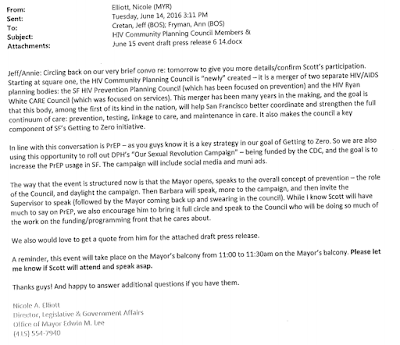 Absolutely nothing about getting either Kim or Campos on board for a media show about AIDS issues they care about. By the way, this merger is among the last of eligible metropolitan areas to merge their HIV prevention and AIDS care councils and San Francisco and far from being the leader on such panels.

Why exactly the mayor needed a quote from Wiener is not explained. 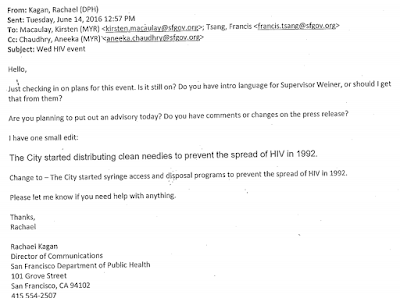 No indication whatsoever that DPH wants the Asian rep from District 6 or the queer Latino rep from the Mission at the event, even though the department is desperate to penetrate their PrEP program into Asian and Latinx communities. Putting politics above people much, DPH? 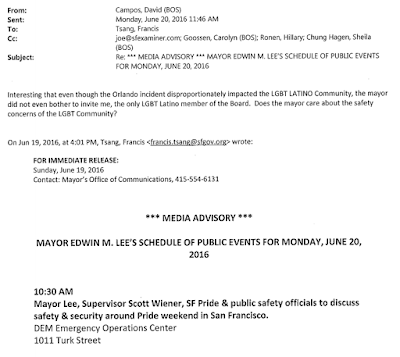 This may get me tossed out of the Critics of Campos Club but good of Campos to write to the mayor, and his SF Examiner mouthpiece stenographer Joe Rodriguez who dutifully wrote something about the email. There was every public safety reason to have Campos and Kim at this mayoral meeting.
Posted by Unknown at 12:22 PM
Email ThisBlogThis!Share to TwitterShare to FacebookShare to Pinterest