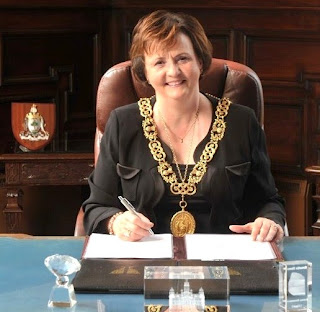 My position on Tuesday at the Russian vodka dump at San Francisco's City Hall regarding any sister city pacts was to cut them. After listening to constructive criticism from friends pointing out that instead of severing the ties with Russian cities, the pacts could better be used to engage and communicate American concerns over anti-gay laws and violence in Russia.

In the letter BoycottRussianVodka.com and Gays Without Borders sent to the California LGBT Caucus in Sacramento on Thursday, requesting they use the state's sister state pacts with the  Khanty-Mansiysk Autonomous Region and the Altai Republic to ask what the government officials there are doing to protect their lesbian, gay, bisexual and transgender citizens.

The liberal MoveOn organized has several petitions on its web site, promoting the severing or suspending of sister city agreements in 27 USA cities. I am boycotting MoveOn's petitions and ask you to do the same.

Instead of bring down an iron curtain of silence and not asking for communication with sister cities, we lose an opportunity to dialogue with local Russian government officials and educate them about our concerns for the LGBT citizens of Russia.

Reading lots of the stories about USA and foreign cities and states facing severing requests, rare is it to read of politicians or activists writing to Russian officials with whom they have agreements and expressing displeasure with new anti-gay laws.

From Dan Littauer, a UK-based gay reporter who has long covered global LGBT matters, we learn that Mayor Sadie Docherty of Glasgow, Scotland, has not only rejected the idea of severing their pact with Rostov-on-Don, she's taken additional steps to engage with her counterpart:

The way to influence policy is to remain within our partnership. It is not practical for cities, countries or states to dissolve long-standing and beneficial relationships because one party does not agree with another's stance on a particular issue.

I have written to the Mayor of Rostov-on-Don and made my position clear on the country's anti-gay legislation.

What message would breaking up our partnership give gay people in Russia? We would effectively be abandoning them. As Lord Provost and First Citizen of Glasgow my job is to promote Glasgow at home and abroad and, on occasion, raise human rights issues.

I am not aware of any other elected official, which does not mean they aren't out there, who have taken the opportunity to write to their sister city's politicians to express unhappiness with the new laws. Mayor Docherty will also meet with her counterpart in Rostov-on-Don in September on an official visit. I hope LGBT Russian issues will be raised, and expect gay people in Glasgow keep pressure on their mayor to forcefully make that visit a spotlight on anti-gay laws.

Before we sever any sister pacts, please, let's first attempt communication with the Russians and keep the cutting of the agreements as a future option over what is going to be a long-term project in repealing the anti-gay laws and protecting the human rights of LGBT people in Russia.

Posted by Unknown at 11:28 AM
Email ThisBlogThis!Share to TwitterShare to FacebookShare to Pinterest