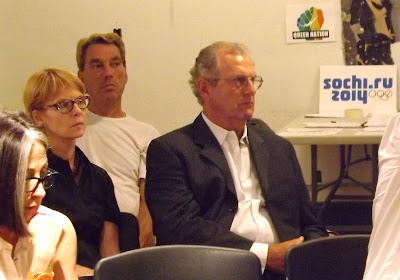 Did you read that lame Op Ed piece in Wednesday's New York Times titled
"Boycotting Vodka Won't Help Russia's Gays", written by Mark Lawrence Schrad? The boycott and Russian gays are unquestionably helped when this paper runs such a prominent piece. Be sure to check out Queer Nation's rebuttal here, from writer John Weir.

Here's the explanation from my pal Duncan Osborne about the photo above:

That's a suited, but tieless John Esposito, president of the newly formed Stoli USA, and Lori J. Tieszen, the senior vice president and chief marketing officer at Stoli USA, in the dark top.

I was staffing the welcome table when they joined the August 21 Queer Nation/RUSA LGBT town hall meeting held at Manhattan's Lesbian, Gay, Bisexual & Transgender Community Center. I recognized Tieszen from her picture when she stepped through the door and correctly assumed that the guy with her was Esposito.

We had a round of introductions and Esposito said they were there to see if we couldn't "work things out." I told them they were welcome and if they wished to speak all they had to do was put their hands in the air and they would get 90 seconds like everyone else.

Later, they were recognized by a Queer Nation NY member and our moderator, Ann Northrop, and by Andrew Miller, a Queer Nation NY member, who discussed the ongoing Russian vodka boycott. I did not watch them for the entire evening, but they never looked more cheerful than this as far as I could see. They chose not to speak. I wonder why.

In other news, my friend Jamie Kirchick zapped Russia Today during a live TV interview on Putin's propaganda channel over the Russian hate laws against LGBT people:

He's promised to come visit me in San Francisco this summer, and now that he's become an international news and queer sensation, I've tweeted congrats to him and said execrable ex-leader of Human Rights Watch's gay desk, Scott Long, would soon attack him because Long loathes any Western gays except himself opining on gay Russia. Our exchange:

@MichaelPetrelis Haha, thanks Michael. You are an inspiration. Keep up the good work and hope to see you in San Francisco soon! xxoo
— Jamie Kirchick (@jkirchick) August 21, 2013


Sure would be great to have Jamie visit us and speak at a public event or two. Regarding public actions showing solidarity with LGBT citizens of Russia and sending a message to Vladimir Putin and his staunch backer in homo-hatred Patriarch Kirill, please come out this Sunday for an important protest in San Francisco.

We're gathering Sunday, August 25 at 11 am at St Nicholas' Russian Orthodox Church located at 2005 - 15th Street, near Church Street, for a peaceful picket. We've got great signage, lots of enormous rainbow flags loaned to us from the good people at SF Pride, and other props. All we need are bodies to join us on the picket line.

Please join us!
Posted by Unknown at 1:21 PM
Email ThisBlogThis!Share to TwitterShare to FacebookShare to Pinterest