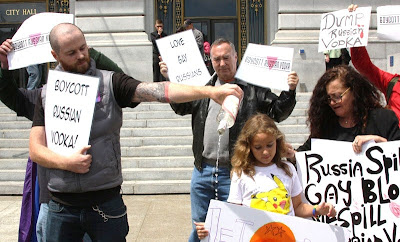 Ten members of Gays Without Borders and the founder of the BoycottRussianVodka.com site Robbie Sweeny, today gathered under a blazing sun at San Francisco City Hall to request Mayor Ed Lee endorse the boycott of Russian alcohol and condemn Russia's anti-gay laws.

The mayor and his press office didn't issue a release about any of this, nor did they deplore the escalation of violence across Russia targeting the LGBT community. In July 2012, Mayor Lee took to Twitter to criticize Chik-Fil-A's anti-gay donations and sentiments of the company's owner:

We yesterday requested Mayor Lee endorse the boycott, refuse to serve or use Russian products at City functions, condemn those laws and severe all "sister city" relationships with Russian municipalities. His response, so far, is silence. 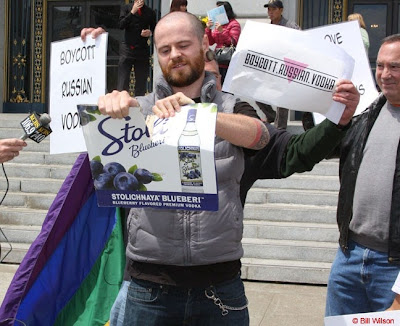 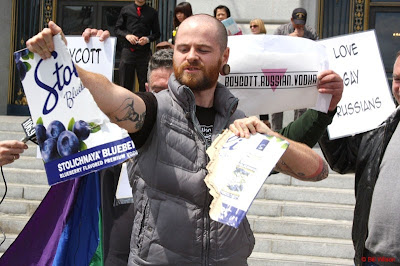 After Sweeny dumped the Russian vodka and promoted his web site, he tore up a Stolichnaya cardboard box. 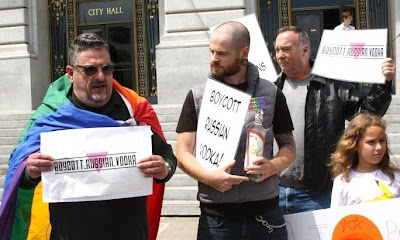 I made a few comments. Standing to the right of Sweeny is longtime gay activist Paul Barwick and the young girl is Rafaela Nathan. 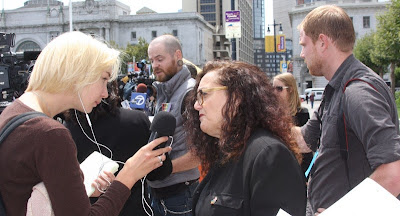 Movement veteran Melanie Nathan, mother of Rafaela, is seen here speaking with a reporter. She explained how the anti-gay laws were enacted in Russia and the terrible impact they're having on the LGBT community over there. 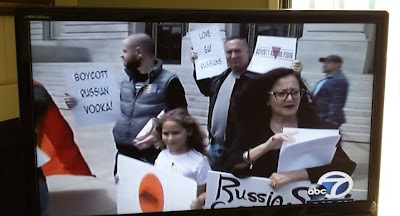 Many TV and radio stations, wire services, two Asian American newspapers and photographers covered our demonstration today, so keep an eye out for articles and pics.

Thanks to all the activists and media folks who showed up today!

(All City Hall protest photos provided courtesy of Bill Wilson. Please credit him, if you use his images.)

Posted by Unknown at 5:46 PM
Email ThisBlogThis!Share to TwitterShare to FacebookShare to Pinterest