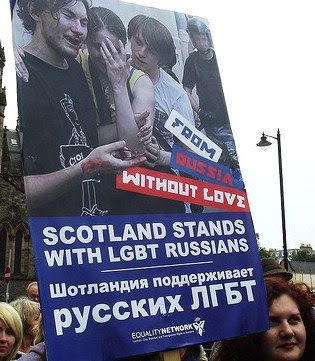 Activists displayed signs in English and Russian, featuring a photo of a brutal and bloody attack on LGBT Russian youths. 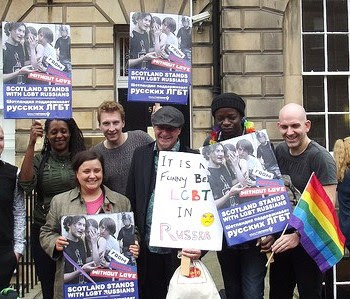 The Russian Consulate's front entrance is behind this fine group of LGBT comedians and community activists, with a sprinkling of straight allies.

Two shots of the solid 150 people who participated in the rally, facing the Russian Consulate. All photos are credited to Marina Menezes's Flickr stream.)


Tonight's good news about continuing local actions in solidarity with gay Russians, comes from the British Comedy Guide site, about an action two days ago:

A large crowd turned out for the free LGBT support gig Mark Thomas organised in Edinburgh on Thursday. The gig came about because, as the basis of his current show, Thomas has set himself the task of 'committing 100 Acts of Minor Dissent' in a year.

For his 26th act, he chose to organise a free LGBT comedy gig outside the Consulate General of the Russian Federation in Edinburgh in response to Russia's new anti-gay rights laws. Amongst the gay, lesbian and bisexual stand-up comedians performing at the gig were Joe Lycett, Zoe Lyons, Susan Calman, Chris Coltrane and Dana Alexander.

With loud cheers from the crowd, Stephen K Amos said at one point: "Do you hear that Russia? If you expect fear, we will bring you fear. We will not take this lying down."

A reminder that this Sunday, August 25 at 11 am at Russian Orthodox St Nicholas Church at 15th and Church Streets in San Francisco, there is a protest taking place and you are invited to participate. Please join us.
Posted by Unknown at 12:49 AM
Email ThisBlogThis!Share to TwitterShare to FacebookShare to Pinterest