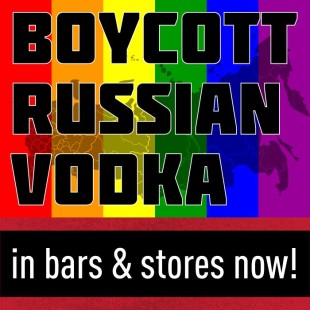 Leaders of Gays Without Borders and the Boycott Russian Vodka campaign are pleased to announce they will dump Russian vodka down the sewer in front of San Francisco's City Hall this Tuesday, August 6 at noon.

The activists have a multi-purpose agenda for the protest in regards to Mayor Ed Lee:

1) Support the boycott of Russian vodka just as he endorsed the Chik-Fil-A boycott last year;

2) Agree not to serve Russian vodka or use Russian products at City functions;

3) Sever any "sister-city" relationships and agreements between San Francisco and any cities in Russia;

4) Declare opposition as the City's top elected official to the anti-LGBT laws in Russia and deplore the escalating violence against the LGBT community in Russia.

We will dump bottles of Russian vodka into the gutter as a protest against the hatred and legislation targeting gay Russians, express solidarity with that community at this dangerous time, build on the recent dumps of Stolichnaya outside the Russian Consulate in New York City and to call on gay and gay-friendly bars and restaurants to stop selling Russian libations because it will help with the liberation of LGBT Russians.

Please join us for this important action on August 6 at noon, on the Polk Street steps of City Hall. A formal press release will be issued tomorrow.
Posted by Unknown at 4:15 PM
Email ThisBlogThis!Share to TwitterShare to FacebookShare to Pinterest

I hope you dump Russian vodka and not Latvian vodka