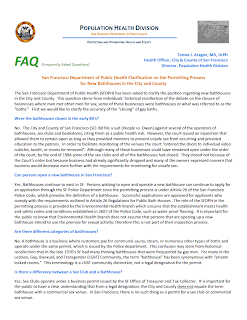 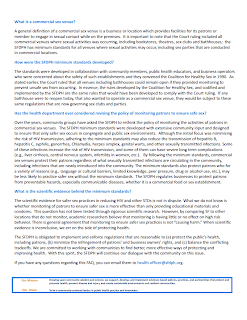 The San Francisco Department of Public Health, at my request in emails to director Barbara Garcia in July, was asked to clarify its current positions regarding the very controversial and confusing policies related to gay men, commercial sex venues with private rooms and locked doors, and the difference between sex clubs and bathhouses.

Today, DPH emailed me their somewhat convoluted positions in a two page PDF, which I'm sharing here and should be suitable for printing.

I find it quite humorous that despite a DPH official telling Seth Hemmelgarn at the Bay Area Reporter last week that they have a plan and design to hold a public forum before the release of the new positions, the forum didn't happen.

DPH developed the positions behind closed doors and the privacy of their offices, the very elements gay men would like to have in bathhouses. We're subject to public monitoring of sexual liaisons in commercial venues, but DPH goes behind closed doors to avoid prying eyes.

Let's go over the key parts of the document:

Q: Can persons open a new bathhouse in San Francisco?

A: Yes. Bathhouses continue to exist in SF. Persons wishing to open and operate a new bathhouse can continue to apply for an application through the SF Police Department since the permitting process is under Article 26 of the San Francisco Police Code, which provides the definition of a bathhouse. Successful applications are approved for applicants who comply with the requirements outlined in Article 26 Regulations for Public Bath Houses. The role of the SFDPH in the permitting process is provided by the Environmental Health Branch which ensures that the establishment meets health and safety codes and conditions established in 2607 of the Police Code, such as water proof flooring. It is important for the public to know that Environmental Health Branch does not assume that persons that are opening up a new bathhouse intend to use the premise for sexual activity; therefore this is not part of their inspection process.

Sounds like good news, right? However, it's the same old b.s. that gay men in San Francisco can't be trusted behind closed doors and require the presence of sex monitors, policies that don't exist in Berkeley or San Jose where gay bathhouses operate with no sex monitors and lockable doors on cubicles:

Q: How were the SFDPH minimum standards developed?

A: The standards were developed in collaboration with community members, public health educators, and business operators who were concerned about the safety of such establishments and they convened the Coalition for Healthy Sex in 1990. As stated earlier, the Court ruled that all venues including bathhouses could remain open if they provided monitoring to prevent unsafe sex from occurring. In essence, the rules developed by the Coalition for Healthy Sex, and codified and implemented by the SFDPH are the same rules that would have been developed to comply with the Court ruling. If any bathhouse were to reopen today, that also wanted to operate as a commercial sex venue, they would be subject to these same regulations that are now governing sex clubs and parties.

Great. A gay bathhouse could open in San Francisco and have sauna and shower facilities, but adult men would not be allowed to engage in sexual relations behind closed doors.

If America can overturn sodomy laws thanks to the Supreme Court's Lawrence v. Texas decision, the ban on gays in the military lifted and gay marriages have resumed in California, we should be able to have consenting sex between males in bathhouses with lockable doors on rooms in San Francisco.
Posted by Unknown at 12:05 PM
Email ThisBlogThis!Share to TwitterShare to FacebookShare to Pinterest