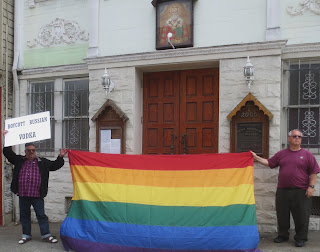 (A preview of tomorrow's action. On the right is Bill Wilson, and yours truly is holding the flag and a sign.)

The announcement from BoycottRussianVodka.com and Gays Without Borders about our peaceful picket tomorrow, Sunday, August 25 at 11 at St Nicholas', located at 15th and Church Streets, was picked up by the American Orthodox Institute. It appears to be a group of Orthodox Christians who are not specifically Russians.

One Fr. Johannes Jacobse weighs in:

It is not that culture rise or falls with homosexual activism. About 3% of the population is actively homosexual and of that number only a few are radical activists. Rather, the near universal collapse of Western institutions to the gay rights cultural agenda indicates that the moral foundations of Western culture are weaker than we want to believe [...]

The protest at St. Nicholas is just another means to pressure [the Russians] [...]

The Russian resistance is against homosexual “propaganda” (their term), and while it offends American sensibilities to frame it this way, there is no denying that homosexual activism seeks to change culture [...]

Another commentator made this friendly suggestion:

If you’re in San Francisco Sunday and see Mr. Sweeny & Mr. Petrelis, invite them in for coffee.

Would that the leaders at St Nicholas had returned our emails and voice mails asking to chat with them, instead of silence, we'd be happy to dialogue along the lines of the discussion above.

I've received two emails from other folks offering to gab over coffee or tea. For confidentiality reasons, I've omitted the names of the writers. The first came from one woman also willing to make a donation to our cause:

I am a Russian Orthodox Christian, and I'm unable to come see you this Sunday for the protest. But I would like to offer to buy you all some bottled water in the name of St John Maximovitch. I can offer $20 via Paypal, and if you'd like to use some of that for sunscreen or snacks that's great too. I will be visiting friends in the Mission from September 7th through the 14th, and I would be happy to buy you a cup of coffee if you'll be in the neighborhood.

I'd prefer to be there to provide some hospitality in person, but I'm in Indiana and my schedule won't allow me to make my visit earlier.

There are a lot of people praying for you all, that your protest goes well, and that there will be good dialogue, dignity, love, and respect.

Looking forward to sitting with this woman when she's my city next month. The second note, also from a woman, also offers something to wet the whistle and clearly spells out her support for our action and intentions:

I saw on your blog that you're expecting at least 20 protesters on Sunday. I wish I were in San Francisco; I'd love to come by with iced tea and cookies for you. I'm a straight ally and an Orthodox Christian who is (like many other Orthodox Christians) more than a little displeased with Metropolitan Kirill's scapegoating of LGBT people. Although I can't be there, y'all will be in my prayers on Sunday. I hope your effort opens a channel for mutual understanding and good will.

Feels good to have generated communication among and with Orthodox Christians, and we haven't staged our action yet.

Please join us tomorrow at 11 am at St Nicholas' for a number of activities, including a moment of silence for all the LGBT citizens of Russia who have died because of hate crimes, or have been demeaned and harmed by their government and the Russian Orthodox Church

The event will end with a singing of the Gay Anthem "Somewhere Over the Rainbow". Don't worry if you can't recall the lyrics. We'll have them printed on paper for you.
Posted by Unknown at 10:15 PM
Email ThisBlogThis!Share to TwitterShare to FacebookShare to Pinterest