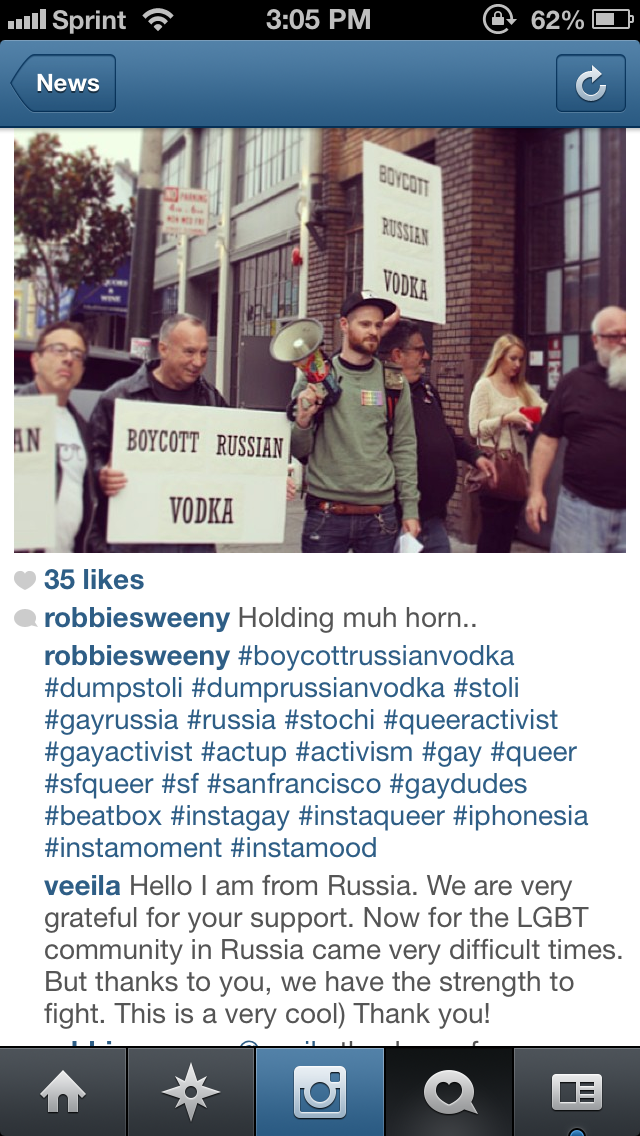 Robbie Sweeny, who initiated the Facebook group Boycott Russian Vodka and is about many issues related to LGBT citizens of that country, received the above message today and is sharing it along with this note:

Just wanted to share this note that I received on my Instagram today, for some reason it has touched me in a very strong way. To know that people on the ground are seeing what little we are able to do and to have them be thankful, well it has pushed me to do more. Lets keep going at all the angles we are going.

Day by day, we all find our inspiration from our courageous queer sisters and brothers in Russia to fight Putin's anti-gay laws and show solidarity with our community over there.


From Paul Barwick of Gays Without Borders comes this clip of last night's teaser and package of three LGBT Russian related stories in one package, that appeared on KTVU/Fox last night during their popular 10 PM broadcast.

If you're wondering why actual Stoli swill wasn't spilled last night, there are two reasons. First, it's against the law to have an open container of alcohol on the streets of San Francisco. This ain't New Orleans, you know.

Secondly, we're boycotting Stolichnaya so the last thing we're gonna do is purchase it for any reason.

Bottom line regarding KTVU's coverage last night, it was fantastic because it showed three distinct approaches activists are taking in solidarity with gay Russians. The first story is about our Stoli dump, next piece informs us about gay U.S. runner at a Moscow track meet dedicating his win to gay Russians and lastly a story about Bay Area debates to potentially sever sister city pacts.

Big thanks to Robbie and Paul for their organizing and advocacy work on behalf of LGBT people of Russia.
Posted by Unknown at 3:46 PM
Email ThisBlogThis!Share to TwitterShare to FacebookShare to Pinterest