A few weeks back, I blogged about the windows of the Stop AIDS Project's storefront in the Castro showcasing enormous signs heralding the 30 percent drop of new HIV infections in San Francisco last year and noted that their budget fell by the same percentage. I had no inkling the agency was in the processing of vacating the premises.

Because the SAP actively worked at creating hysteria and controversy regarding gay male sexuality and HIV prevention, which directly increased stigma for people living with AIDS and sexually active gays, never praising the community for reductions of infections due to patient-created sero-sorting and drug adherence, endlessly chasing after shame-based federal prevention grants, refusing to lift a finger helping the grassroots effort to reopen the bathhouses, executives worried about resume-building and their next job, bogus street surveys, condemning barebacking while their own employees advertised on raw sex sites, and lots of other reasons I've advocated putting the project out of business.

While I've not succeeded - yet - in making SAP go away and leave the gays alone, I played a significant role forcing them to give up all federal contracts and I'm damn happy to still be here witnessing the shrinking of the agency.

I snapped pix today of the now-vacated storefront SAP used to maintain on Sanchez and Market Streets. The retail space is empty and available for lease. SAP should update its web page listing their locations because they no longer have an operation on Sanchez.

Here's my best pic of the former SAP space in the Castro. Click to enlarge and clearly read the name and contact info of the owner: 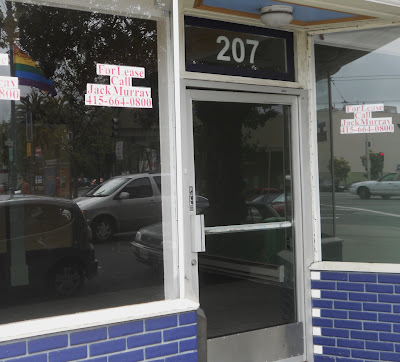 Posted by Unknown at 9:25 PM
Email ThisBlogThis!Share to TwitterShare to FacebookShare to Pinterest