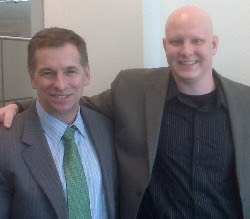 Some activists in the alleged ex-gay movement today issued a released about a February 2010 meeting they had with Department of Education's safe schools czar Kevin Jennings, who soon departs for a job back in the nonprofit world, and it's not clear why they are now calling attention to that meeting, long after it occurred.

BTW, I've been unable to locate any previous mention or coverage about the meeting last year. Maybe I should be grateful these destructive ex-gays kept the briefing hush-hush.

I must admit it appears very odd that the out and proud Jennings, who started the Gay, Lesbian and Straight Education Network and has faced scorching controversy from conservatives his entire tenure working for the Obama administration, would even meet with the ex-gays. I'm extremely leery of the motivations of the ex-gays and their claims of what Jennings agreed with them on:

Here are parts of the release:

Parents and Friends of Ex-Gays & Gays (PFOX) today thanked Kevin Jennings, Assistant Deputy Director of the Department of Education, for meeting with PFOX and called upon President Obama to do the same.

Jennings recently announced he will leave the Office of Safe and Drug Free Schools. ... However, during Jennings' tenure he met with PFOX, which advocates for equality and equal access for the ex-gay community, and assured them that his office represents students with all sexual orientations, including those with unwanted same-sex attractions (SSA). Jennings also affirmed the right of ex-gay organizations to have equal access in the nation's schools and agreed that former homosexuals should not be discriminated against during outreach efforts for students with unwanted SSA.

"I commend Mr. Jennings for affirming that his work to combat bullying in schools includes protection for ex-gays," commented former homosexual Christopher Doyle, one of several PFOX Board Members who in February of 2010 met with Jennings and Joseph Wheeler, Attorney for the Department of Education's Office of Civil Rights. ...

In light of the Administration's recent meeting with the transgender community, PFOX is calling on President Obama to extend the same courtesy and meet with ex-gays. ...

Alarms are going off, and I simply cannot believe Jennings would do a damn thing to help groups with bogus and deceptive theories that can cause serious harm to young persons get in schools and disseminate lies. Whatever vague affirmations Jennings may have spoken at the PFOX meeting, are probably being carefully stretched by the ex-gays.

What a crock of manure. The Obama team should do all it can to counter the harmful effects of PFOX and similar organizations, because they continuously push policies equal to flat earth theories.

Over at the Department of Education, Jennings and the public affairs office should issue a clarifying response to the release. It should not stand without direct challenge to its veracity. The release ran on a number of Christian blogs and this Christian wire, which included the undated photo above showing Jennings on the left and PFOX's Doyle next to him.
Posted by Unknown at 11:20 PM
Email ThisBlogThis!Share to TwitterShare to FacebookShare to Pinterest

This is why I'm very wary when Gay Inc org's tout Obama's glorious achievements via his own press releases. What we do know is generally used only for propaganda purposes. It's what we don't know that's killing us.