I don't follow sports and today was informed that a rabid anti-gay advocate by the name of Tony Dungy, a former National Football League coach, penned the foreword for GLAAD co-chair Roxanne Jones' 2010 book on black athletes "Say It Loud". It was published by Jones' employer EPSN's book division.

As reported previously, Jones is as straight person.

Before joining forces with Jones, Dungy was roundly criticized by gay advocates in 2007 when he was the honored speaker at a fundraiser for the Indiana Family Institute  organization, which is affiliated with James Dobson's Focus on the Family and opposes liberation and fairness for gay people.

According to the Associated Press, at the 2007 IFI dinner Dungy endorsed the group's agenda:

The coach told the audience he supported the group’s efforts to amend the Indiana constitution to define marriage as between one man and one woman.

“I appreciate the stance they’re taking, and I embrace that stance,” Dungy told the crowd of about 700 people. Dungy said his comments should not be considered gay bashing. ...

In 2009 he was selected to serve on President Obama's Advisory Council on Faith-Based and Neighborhood Partnerships and GLAAD condemned the White House nominating him to the council:
It’s unclear exactly what role Dungy will play in the advisory council. However, [GLAAD has] serious concerns that he can work objectively and effectively with LGBT nonprofits and LGBT community organizations. Will he shoot down or undermine worthy plans submitted by LGBT groups simply because they are LGBT?

This is an area where the media (traditional and bloggers) needs to dig in and consistently report on to ensure all communities are served for the better. ...

Dungy eventually didn't serve on the council due to scheduling conflicts. Don't you just love how GLAAD directs others to dig in and make sure the gay community is well-served in matters related to Dungy and the council?

Let's dig in and ask some questions. Why does the co-chair of GLAAD, after years of anti-gay controversies with Dungy, work with him on her book and use an essay of his as the foreword? Why did GLAAD stay silent on Jones collaborating with the homophobe, when it had plenty to say at the time his name was floated to serve on a White House panel?

More questions. Does GLAAD have different standards about when to publicly criticize an entity from working with him, one for the White House and another for a co-chair?

If there is a shred of integrity among the board members or executives at GLAAD, I'm not aware of it. With straight allies like Jones giving cover to and willfully ignoring a homophobes obnoxious bias against us, with don't need adversaries.

Let's put GLAAD out of business and halt the damage it does to the LGBT community. 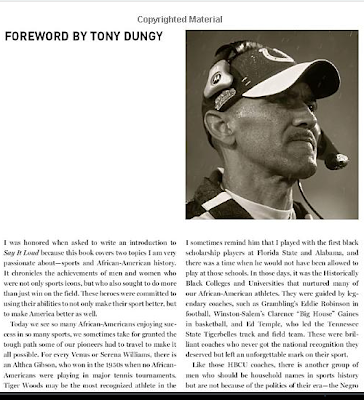 (Screen grab of the opening page of the foreword. Hat tip: NG.)
Posted by Unknown at 2:28 PM
Email ThisBlogThis!Share to TwitterShare to FacebookShare to Pinterest

Gee, this one's really beginning to stink. Keep it up! Maybe they'll haul out the trash before everyone has to be airlifted out because of the rot.

Yes, it's clear you don't follow sports when you refer to Tony Dungy as, "a rabid anti-Gay advocate"

Who "informed" you of this? Is that the term they used or is that libelous bit of hyperbole all your own?

Tony Dungy is a fine person and a upstanding man (and a great Super Bowl winning, future Hall of Fame coach. Yes, I follow the NFL.) who has spent "years" helping to turn around the lives of young Black men who would've otherwise been in jail, or worse, dead.

Yes, he's religious. Yes, he's a man of deep faith who believes in heterosexual marriage. That's his opinion. And as far as I have seen, he has always presented that opinion in a respectful manner.

A "rabid anti-Gay advocate" he's not!

Show me a "rabid anti-Gay" rant by Tony Dungy, either in print or in video. And I mean something far more substantial than the weak examples you cited in your article.

Show me a spittle spewing, lectern pounding, anti-Gay, Fred Phelps, Lou Sheldon type rant. That's what I picture when I hear someone described as "a rabid anti-Gay advocate."

I'm holding you to the same standard I've seen you hold others. You made the statement, now back it up!

As for your question:

"Why does the co-chair of GLAAD, after years of anti-gay controversies with Dungy, work with him on her book and use an essay of his as the foreword? Why did GLAAD stay silent on Jones collaborating with the homophobe..."

Besides your off-base characterization of Tony as a "homophobe" - it's a book by a Black woman, talking about Black athletes, with a celebrated Black coach, and meant for a primarily Black readership.

It's not for the edification (or approval) of you, GLAAD, or any other White person. Some nerve!

Much of your work I like and appreciate. Not this piece. In fact, it left me frackin' pissed off!

here are a few definitions of rabid at websters.com:

1.
irrationally extreme in opinion or practice: a rabid isolationist; a rabid baseball fan.
2.
furious or raging; violently intense: a rabid hunger.
3.
affected with or pertaining to rabies; mad.

i used the word rabid in this post's headline because i believe dungy's views on gays and gay marriage are irrational. in my book, he's a homophobe and i think it was wrong of the glaad co-chair to work with him, and for glaad, which had chastised him for his homo hatred, to give their co-chair a pass.

one source i checked for some background on dungy and his homophobia was the outsports site. a founder of the site, cyd zeigler wrote several pieces on dungy's antigay views:

yeah, i think there is plenty of evidence for me to say dungy is rabid in his homo hate.

you are free to view dungy, roxanne jones, her book and everything else in this post anyway you wish. my definition of who is a rabid homophobe is different than yours.