Gay Syrian Hoaxer Gets
Blogger.com to Censor my Site 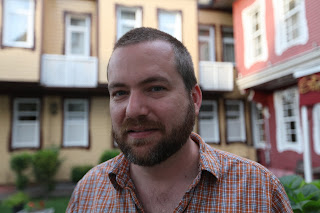 (Tom MacMaster, "Amina Arraf" & "Miriam Umm Ibni". Credit: Alexander Christie Miller.)
On Friday, I received two notices from Blogger.com regarding a post of mine about the Gay Girl in Damascus hoaxer Tom MacMaster and how he tried to secure a book deal posing as Amina Arraf. The post relayed info I had found on Minal Hajratwala's blog and I quoted an email she had received from MacMaster posing as Arraf. His email was under 30 words.

Blogger.com appended this note to my dashboard, bolding in the original:

We have received a DMCA [Digital Millennium Copyright Act] complaint for your blog, Petrelis Files. An e-mail with the details of the complaint was sent to you on Jun 24, 2011 , and we reset the post status to "Draft"; you can edit it here. You may republish the post with the offending content and/or link(s) removed. If you believe you have the rights to post this content, you can file a counter-claim with us. For more on our DMCA policy, please click here. Thank you for your prompt attention.

Notice that it says nothing about what exactly in my post is a supposed violation. I filed a counter-claim stating I needed know which words had to be altered. To make sure I got the message, Blogger.com also emailed me a longer version of the note, which again omitted reference to the specific text that prompted the complaint.

Suspecting the complainant was MacMaster, I emailed him and asked for an explanation and have not heard back from him. Very sorry to see him use Blogger.com to censor my site, but he's man without integrity or scruples so it's not surprising censorship is one of his tools in attempting to restore his tarnished reputation.

My post in question is in draft mode and I will not be amending it in any way until I hear back from Blogger.com or the Electronic Frontier Foundation. I filed a complaint with the EFF and hope to receive advice from them about challenging the copyright violation claim.

In other news on MacMaster, it appears as though he's created a second female Syrian on at least one web site, MondoWeiss.

Click here to read the post that generated a note from the alleged female Syrian, a reply from another commentator who found MacMaster's fingerprints on the female Syrian's note and then an admission by the hoaxer that a "friend" wishing to defend his actions has used his computer to post the note and wished to remain nameless.

Over at the Guardian's web site, Esther Addley, who has been following MacMaster and his hoax, write an excellent piece about his latest act of b.s. on the web. Addley writes:

The Guardian has seen screengrabs of the IP data, emailed by one of the site's hosts Adam Horowitz, that show the post originated from the address 188.74.64.53.

Journalists, bloggers and web users unmasked MacMaster earlier this month as the unlikely hoaxer behind the Amina blog, in part after its posts were traced to the address.

In an email, later posted on the site, MacMaster acknowledged that "Miriam Umm Ibni" was a fake identity, but denied being behind it, saying a "friend of mine who would really like to remain nameless" had posted the comment in his defence. It came from the same IP address because she had been staying with his wife and him, he wrote. ...

How many sockpuppets has MacMaster created and when will he stop putting out the lamest of excuses for his stupidity? He should get a clue as to how many folks around the world are tracking his online efforts and also know how to detect his fingerprints on his "friends" messages left at various blogs.
Posted by Unknown at 4:00 PM
Email ThisBlogThis!Share to TwitterShare to FacebookShare to Pinterest

What a creepy guy he is. I wonder how this will eventually come down: is he a (misguided) "progressive" as he claims, or a pinkwashing tool of the Israeli propaganda machine? I hope time will tell.