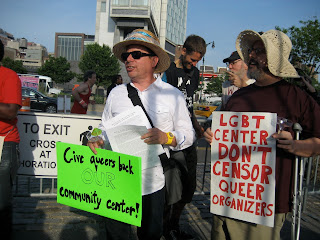 (Protesters outside the NYC gay center's fundraiser on June 20. Courtesy photo.)
It's quite rare to find other gays calling for genuine, regular democratic engagement from our alleged community organizations, the executives paid robust salaries to run them and the boards that oversee the operations and staff.

I'm pleased to report on a new coalition of diverse activists in New York City who have formed the Queers for an Open LGBT Center, which grew out of the controversy back in the spring about gay groups concerned with Israeli and Palestinian matters meeting the community center on W. 13th Street in the Village.

What a radical notion. Demanding open meetings with leaders of, ahem, the community center in NYC. The center's board, like practically every other board in the Gay Inc orbit does not allow for community to observe their proceedings and forget offering comments to the board members.

Several members of QFOLC have told me they cite the example of the San Francisco LGBT Community Center making all of its board meetings open to the public, in arguing for a similar policy in NYC.

Here's a report from QFLOC about the June 20 picket:

About 45 people turned up to protest the LGBT Center's censorship and general bad behavior yesterday, delivering 600 flyers to partygoers and a strong message to the Center: "you can't avoid controversy by slamming the door on the queer community!"

The shameful lack of democratic engagement by the NYC center and too many Gay Inc groups is so obvious I'm surprised billionaire financier and promoter of democracy in former Communist countries and other repressive nations George Soros has not started an LGBT democracy project.

The question of when was the last (or first) time HRC, GLAAD, NGLTF, Lambda Legal, Freedom to Marry, or the Victory Fund, or the foundations that endow Gay Inc organizations with money - the Gill, Haas, Arcus, van Ameringen, Michael Palm, David Bohnett, et al - held an open community meeting should be asked over and over until they fully commit to democratic engagement and full transparency.

Many thanks to the QFOLC folks for being public with their demands for democracy and open board meetings at the NYC center. We need more folks pressing all Gay Inc group to adopt transparent principles.
Posted by Unknown at 10:09 AM
Email ThisBlogThis!Share to TwitterShare to FacebookShare to Pinterest